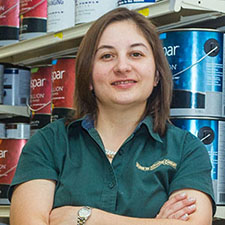 Over $2 Million in Sales

Round Top Merchantile, Round Top, Texas

Jackie may have only been looking for a little extra cash when she took a part-time job at Round Top Mercantile. But today, 17 years later, it’s evident she found a career, and a new family.

Michael Sacks, son of owners Betty and Ronny, was one of the first people Jackie met when she took that part-time job during high school. A friendship grew into a romance, and a few years later, they were married. In 2014, they took over ownership of the business from Michael’s parents.

After more than a decade of learning the various aspects of running a retail establishment, Jackie and Michael were now ready to put their own mark on the store. The first major project was to expand the building so they would have more room for their growing product categories. Jackie oversaw every aspect of the expansion, which doubled the size of the salefloor. She designed the new layout and added more than 5,000 new items to the store’s product mix.

While Jackie and Michel added items to categories across the store so they could better serve their customers’ needs, paint and lawn and garden were two departments that got the most attention. Before, the store had only carried a basic line of pre-mixed paint. Jackie led the way in purchasing a paint mixer and expanded the paint selection so there would be more items DIY customers might want. In lawn and garden, she added more organic products, looking for a way to cater to a wider range of customers. She also added other niche lines, including boots and apparel, and outdoor power equipment. As a result, the store that before carried mostly a few convenience hardware items had become a one-stop-shop, able to cater to a more diverse customer base.

“Before, we had mostly do-it-yourselfers and weren’t able to help out the contractors,” she says. “Now, we’ve gone from convenience store to a destination store for the entire project. We wanted to keep our customers from going out of town to get what they needed.”

As the store grew, so did the need for staff. Jackie doubled the number of employees to 20. She takes all of the responsibilities of managing them, and has created a more organized system of scheduling, formalized policies and store uniforms.

Round Top Mercantile is unique in that it has a grocery store in addition to the hardware. Along with the basics, the store specializes in high-end foods, local produce and a deli counter offering fresh-made sandwiches. Managing two very different types of retail stores adds an extra challenge for Jackie, but it’s one she’s learned to handle with ease. “Fortunately, we have a good team on the grocery side of the business, too, that helps me manage that area,” she says. “We’re able to hold our own in what is a competitive business. Overall, business on both the grocery and hardware sides continues to grow. We’ve exceeded all of the expectations that we set for ourselves when we purchased it.”

Outside of the store, Jackie and Michael have been involved in nearly every part of the community. Among her many volunteer activities, Jackie has been president of the parent’s club at the local school, where she has helped raise money for technology for the classroom and educational field trips. As vice president of the Do-Your-Duty ladies’ organization, she helps raise money for maintaining the town’s courthouse. She assists with fundraisers to support the local fire department, where Michael is an active volunteer.

Jesse Carleton has visited independent hardware retailers, conducted original research on the industry and written extensively about the business of hardware retailing. Jesse has written for more than a dozen of NHPA’s contract publishing titles, all related to the hardware retailing industry. He also was instrumental in developing the Basic Training in Hardware Retailing courses now used by thousands of retailers across the country.
Previous Home Depot Reports Q1 Growth
Next 2017 Young Retailer of the Year: Jarrod Haines