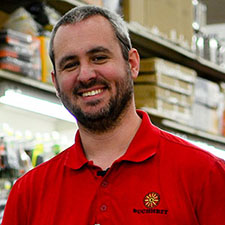 When Jarrod Haines joined Buchheit in 2012, it didn’t take long for him to become one of the company’s rising stars. Jarrod already had a solid foundation in the retail hardware industry. He spent eight years working at Lowe’s, where he received formal management training and advanced to assistant store manager. As a member of the team at Buchheit, Jarrod has quickly demonstrated a natural talent for leadership and training.

Jarrod first joined Buchheit in its Herculaneum, Missouri, location. There, after taking the lead role in a complete store remodel and helping to improve the performance of several categories, he received the assignment to help develop a sporting goods category. While sporting goods was a new venture for Jarrod, he taught himself as much as he could, and then passed that on to his employees. The department was a success, soon becoming a destination point for hunters.

In 2014, Jarrod moved to the newest Buchheit location in House Springs, Missouri, as an assistant store manager. Jarrod has a knack for creative merchandising, and he soon put that into play in several departments throughout the store. He also knows his employees have good ideas as well, so he encourages input from the entire staff. “I’m a big advocate of letting employees use their own ideas,” he says. “It’s important to encourage their creativity, and then let them try something and see what works.” He introduced internal competitions for employees to see who could create the best displays. Since Jarrod stepped into leadership at the store, there have been double-digit sales and profit increases.

Jarrod also puts an emphasis on employee training. To improve customer service, Jarrod began a cross-training program so employees would be able to work in any department. He also introduced morning employee meetings where he could address training topics such as product knowledge and selling skills.

This past fall, Jarrod faced another challenge. Two competitors moved into the area. While for some retailers, that would have been a major blow, Jarrod saw it as an opportunity to strengthen his operation. He put an increased emphasis on marketing his store’s strengths and continued to look for ways to out-sell and out-merchandise his competition. As a result, he was able to maintain profit and customer counts.

Jarrod is also a leader in the community. Since many of the customers coming in to Buchheit are farmers, it’s a natural fit that he participates in the county fair. He maintains strong ties with area FFA and 4-H clubs, whether it’s inviting club members to the store to show them a simple DIY project, or bidding on animals at the annual 4-H auction. He is also known in the town for the work he has done with local veterans’ groups. He worked with a local school group to decorate two parking spots at his store, which are reserved for Purple Heart recipients. He further supports veterans by coordinating donations to the local Amvets organization.

Jesse Carleton has visited independent hardware retailers, conducted original research on the industry and written extensively about the business of hardware retailing. Jesse has written for more than a dozen of NHPA’s contract publishing titles, all related to the hardware retailing industry. He also was instrumental in developing the Basic Training in Hardware Retailing courses now used by thousands of retailers across the country.
Previous 2017 Young Retailer of the Year: Jackie Sacks
Next 2017 Young Retailer of the Year: Joseph Franquinha