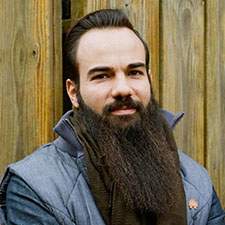 A strong commitment to community and a tireless creative spirit run deep at Crest True Value Hardware and Urban Garden Center. Owner Joseph Franquinha has created a store that is as unique and diverse as the Brooklyn community surrounding it.

Joseph grew up at Crest Hardware, watching his father, Manny, and uncle, Joe, keep their business relevant and successful, despite many changes to the city around them. When Joseph decided to return to the business in 2005 after college, he began to build on the foundation they laid for him. “I’ve found that a willingness to truly listen and learn from customers, take calculated risks, instill confidence in employees and encourage creativity, and to do all of that with enthusiasm and humor, are critical to success,” he says.

One of his first projects was to fill what he saw was a major void in the local market. After listening to multiple customers request lawn and garden supplies, he decided to research what it would take to add a plant and garden department to the store. What started as a 700-square-foot retail space behind the store is now a 5,000-square-foot department with a year-round greenhouse and five full-time, year-round staff. Joseph even rents out the garden space for weddings and small events.

Additions of other products have shown Joseph has a keen sense for understanding what customers want. While the store had always carried paint, the selection had been basic. Knowing paint could be a major department for the store, he expanded his paint selection to include the entire line of Pratt and Lambert paints and the full line of Montana spray paint, which includes more than 250 colors and is popular with local street artists. To help further diversify his product mix, Joseph added a housewares department and a seasonal department, both of which have been successful for the store.

A few years after Joseph took over ownership of the business in 2007, he began a full remodel and update of the building. To create a new atmosphere in the store, he made several aesthetic changes, including new fixtures, new flooring made with reclaimed lumber that came from structures devastated by Hurricane Sandy and new signage painted by a local artist. He also made the building more energy-efficient with updated lighting and an updated HVAC system.

In addition to revamping the physical building, Joseph has worked hard to build a new brand for the business. With the help of his wife, Liza, who is a graphic designer, he redesigned the store’s logo and began producing branded merchandise, which includes everything from hats and bags to flasks and camping equipment. He also created a new website for the store and has aggressively pursued social media platforms. “Operating in Brooklyn makes you want to push the envelope a bit. Standards here are high, even for a hardware store, but we welcome the challenge!” he says.

Crest Hardware has also become a destination for local artists, too. During the annual Crest Hardware Art Show, more than 150 artists install their artwork throughout the store. Crest Fest is an annual festival that includes live music, performance art, vendors, crafts for children and food and drinks, and attendance usually tops 5,000 people. Joseph also started the popular Crest Pumpkin Carving contest and the Quickie Crest Film Fest, featuring local filmmakers. “Hosting events is another marketing tool we use to draw people in while simultaneously connecting with the community,” he says.

True to his commitment to his community, Joseph donates his time and talent to not-for-profits around Brooklyn. His many social endeavors include sitting on the boards of directors for two local arts organizations, The City Reliquary Museum and Arts@Renaissance, and supporting the North Brooklyn Public School System.

Jesse Carleton has visited independent hardware retailers, conducted original research on the industry and written extensively about the business of hardware retailing. Jesse has written for more than a dozen of NHPA’s contract publishing titles, all related to the hardware retailing industry. He also was instrumental in developing the Basic Training in Hardware Retailing courses now used by thousands of retailers across the country.
Previous 2017 Young Retailer of the Year: Jarrod Haines
Next 2017 Young Retailer of the Year: RJ McDaniel