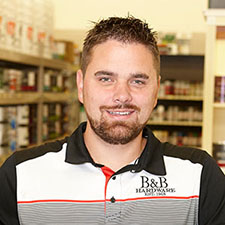 RJ started working in the family’s hardware store when he was 15, and he never left. Now, as the fourth generation to step into ownership, he’s been taking the business in new directions, showing he’s not afraid to look for opportunities outside the boundaries of typical hardware categories.

After he graduated college in 2005, RJ began looking for ways to modernize the business and prepare it for future growth. He replaced the cash register with a computerized system. Then, realizing that the store’s existing location had outlived its usefulness, he spearheaded the move to a new location, which gave him three times the square footage of the old building. With more space to work with, RJ expanded his product offerings in nearly every department so he could better serve his customers. One of the biggest successes was the addition of a rental department. Rental started off strong as an instant success with customers and has continued to gain momentum.

With all of the changes at B&B Hardware, RJ also attracted a new customer base. Before, many of his customers were contractors. Today, the new store is more appealing to do-it-yourselfers, and that customer base makes up 40 percent of his sales.

“Customer feedback totally drives our product mix,” he says. “I know more than half of my customers by their first name, and most of them have my cell number, so they call and text me often with feedback. I want to know why they go elsewhere for what I don’t have. If it’s something I can get, I start carrying it.”

Perhaps one of the more unusual items customers can buy at B&B is also one of RJ’s most profitable. RJ had discovered the sport of disc golf in college, and as a retailer, he saw an opportunity. Realizing no one in his area sold the supplies disc golfers needed to play the game, he decided to try selling a few discs and accessories. It was an instant success, soon outperforming traditional hardware categories.

RJ’s involvement in disc golfing has also gone beyond just selling the product. He has sponsored local tournaments, including the USDG Pro Tournament, one of the largest tournaments in the country, as well as several professional disc golfers. He has also been instrumental in helping local residents find a place to play disc golf. He worked with the Village of Milan to covert an unused wooded area next to an amateur disc course in a local park into a professional level course. He helped raise money for the project and since then, the course has hosted several major disc golfing events.

RJ also found ways to leverage the store’s Federal Firearms License (FFL) to bring in more customers. He listed his store’s information with all of the major online gun retailers, and then lowered his license fee below that of his competitors. The number of customers coming into his store for his FFL service increased 20 times.

With more gun owners coming into the store, RJ has increased his selection of firearms and other related items, such as ammo. He has also raised the store’s profile in the local hunting and outdoorsmen community by volunteering at banquets for the local chapters of Ducks Unlimited, the National Wild Turkey Federation and Whitetails Unlimited.

In the community, RJ looks for ways to donate his resources, often using his love of disc golfing. He has volunteered at Arrowhead Ranch, a local facility that works with at-risk youth. One of his favorite charitable events is the annual Disc’n for Dogs, which brings 150 disc golfers to raise money for a local no-kill animal shelter. As a father, he has volunteered his time coaching basketball, softball and t-ball at his children’s school.

Jesse Carleton has visited independent hardware retailers, conducted original research on the industry and written extensively about the business of hardware retailing. Jesse has written for more than a dozen of NRHA’s contract publishing titles, all related to the hardware retailing industry. He also was instrumental in developing the Basic Training in Hardware Retailing courses now used by thousands of retailers across the country.
Previous 2017 Young Retailer of the Year: Joseph Franquinha
Next 2017 Young Retailer of the Year: Bobby Heuser 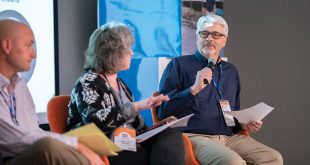