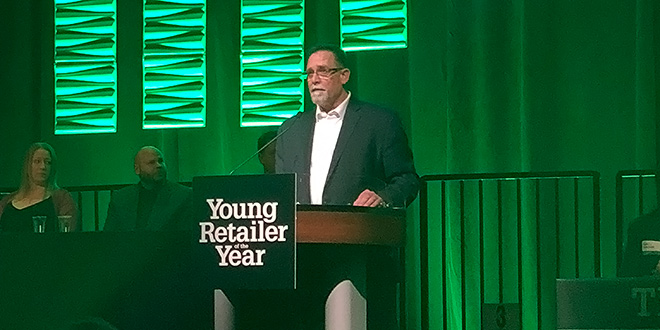 2018 Young Retailer of the Year Honorees Celebrated in Las Vegas

For 22 years, the North American Retail Hardware Association (NRHA) has highlighted the achievements of independent home improvement retailers 35 years old and younger through its Young Retailer of the Year program.

Prior to the NRHA All-Industry Conference at the National Hardware Show®, which opens Tuesday, the association celebrated the eight honorees in a ceremony on Monday night. The Young Retailer of the Year program honors retailers in three categories: sales above $2 million; sales under $2 million; and multistore operations.

“This evening is one of my favorites of the year,” NRHA president and CEO Bob Cutter says. “In spite of today’s public opinion, the independent home improvement retail channel is strong and vibrant and poised for a bright future.”

“These men and women represent the next generation of entrepreneurs who will point the way forward for our industry,” Wright says.

The retailers took the stage in Las Vegas to share their stories about how they became involved in the industry and to thank their supporters.

This year’s Young Retailer of the Year honorees are:

“There isn’t one thing I wouldn’t do for my store and my staff. This award isn’t just mine. It’s all of theirs, too.”

“It is rewarding and humbling to receive this award. It would not have been possible without our team back home and the support of our community.”

“Our success has been secret. It’s about differentiating our business through exceptional customer service.”

“Customers are the lifeline of any business, but if you want your customers to love your business, your staff must love it.”

“Thanks to NRHA for being the visionary that keeps us excited and focused with what we do. Thank you for having this vision and having us here tonight.”

“I really hope to see more young people come into this industry. It attracts and it cultivates a lot of talent.”

Melanie is the communications and content manager for the North American Hardware and Paint Association. She joined the NHPA team in 2016 as an editor for Hardware Retailing and now helps lead the communications team to deliver relevant, timely content to the industry.
Previous Study: Shopping Local vs. Amazon Makes Powerful Impact
Next Shock-Absorbent Strap System