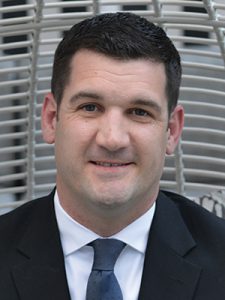 We’re not just here to make money, we’re giving back to our community. It’s who we are; that’s just part of our makeup. We look forward to continuing this tradition in the new communities we are expanding into.

When Nate Ludwig took control of a failing lumber and building materials business in the small town of Garberville, he turned it into a booming business practically overnight. But his story of overcoming seemingly insurmountable obstacles starts much earlier in his life.

Ludwig was only a teenager when his father suddenly lost his sight due to diabetes, leaving him unable to work. Seeking a way to support his family, Ludwig went to work on a construction crew full time. Then after high school he landed a part-time job at a nearby lumberyard. That turned out to be an opportunity that would change his entire career path. Darren Tomasini, the store’s general manager, who became his friend and mentor, saw Ludwig’s potential and offered him a job as manager at the company’s second location, Arcata Lumber.

In 2011, Ludwig left the business to return to construction, but a passion for retail was in his blood. In 2014, he had the opportunity to become the manager of the newly formed Dazey’s Building Center in Garberville. The facility consisted of a dilapidated building in a town of 1,100 citizens that had been closed for a year. The business needed a complete fresh start and an enthusiastic leader to guide it to success.

For the next two and a half months, Ludwig poured his energy into remodeling the store. He also studied his customer base and realized their needs were unconventional. Most of his customers were in remote locations with little access to traditional goods and services, such as utilities. That meant many of them needed a wide range of products, including semi-loads of ready-mix concrete, water tanks and industrial water filtration systems. Because that customer base had been underserved for years, Ludwig identified an enormous potential for growth. The results were unconventional, too. The business had rung up $1 million in annual sales under the previous owner. Ludwig finished his first year with $4 million in sales.

In the years that followed, growth continued, as Ludwig made property improvements, added a category in custom metal buildings, and opened two more locations. By 2017, sales at Dazey’s had increased to $10 million.

Despite all the work required in building a successful business, Ludwig still finds ways to spend quality time with his wife and seven children and give back to his community.

For 10 years, Ludwig was a youth pastor as his church in Eureka, California. He currently serves as one of nine sectional youth directors for the United Pentecostal Church International, where he helps plan camps and conventions for youth throughout the state. At the store, Ludwig oversees fundraisers for local schools and fire departments.

Jesse Carleton has visited independent hardware retailers, conducted original research on the industry and written extensively about the business of hardware retailing. Jesse has written for more than a dozen of NRHA’s contract publishing titles, all related to the hardware retailing industry. He also was instrumental in developing the Basic Training in Hardware Retailing courses now used by thousands of retailers across the country.
Previous 2018 Young Retailer of the Year: Byron Clouse
Next 2018 Young Retailer of the Year: Diana Newton