Building relationships with the community lets people know we have local roots and gives us feedback about how we can meet their needs.

Franklin Cloninger started managing Triangle True Value Hardware just as the town of Greenwood, South Carolina, was dealing with one of the worst economic declines in decades. Rather than pull back and wait for conditions to improve, Cloninger fully invested his energy into the business. In 2014, he oversaw a store remodel to make the business easier to shop and expanded core categories with more products to appeal to DIY customers. That year, sales increased by 12 percent and continued to make gains the following year, despite the difficult economic conditions.

Even with solid financial gains, Cloninger is quick to point out the success of his business is directly linked to the skills and competency of his employees. He’s hired a staff that reflects the diversity of his customer base, and Cloninger puts each employee through an extensive training program. Employees take online courses, and he has created his own resources to deliver hands-on training. Always eager to learn, he seeks ways to advance his own education whenever he can. He’s attended classes provided by his wholesaler, and he is a graduate of NRHA’s Retail Management Certification Program.

Maintaining a successful business has also meant changing with the times. While his store remodel helped broaden Cloninger’s customer base, he has also initiated store events and wielded the power of social media. At the store’s holiday open house, customers make crafts, send letters to Santa and shop for holiday gifts. As part of his Christmas promotion, Cloninger posted photos featuring himself as a real-life Elf on the Shelf. Traffic to the store’s Facebook page rose as followers were eager to see where the elf would appear next.

It’s difficult to separate Cloninger’s devotion to his community from his commitment to running a thriving hardware store. In high school, when he was just beginning his retail career, he began training to become a member of the volunteer fire department. He currently holds the rank of assistant chief and supports the safety of all residents in the community.

Rental has been one of Cloninger’s key departments. He’s built up the department to meet the needs of a wide range of customers, and he contributes to the rental industry at large. He is an active member of the American Rental Association, serving as president of the organization’s South Carolina chapter. In this role, he has traveled to Washington, D.C., to meet with legislators and discuss the specific needs of the rental industry and the independent business community as a whole.

While he has found specific leadership roles in the community, Cloninger encourages his entire staff to be involved in local events, whether it’s by participating in local parades or assisting with the construction and maintenance of a local park and dog run.

Jesse Carleton has visited independent hardware retailers, conducted original research on the industry and written extensively about the business of hardware retailing. Jesse has written for more than a dozen of NRHA’s contract publishing titles, all related to the hardware retailing industry. He also was instrumental in developing the Basic Training in Hardware Retailing courses now used by thousands of retailers across the country.
Previous Water Bottle Brush
Next 2019 Young Retailer of the Year: TJ Colson 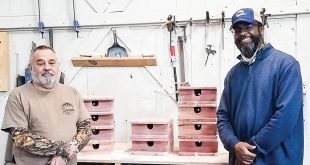