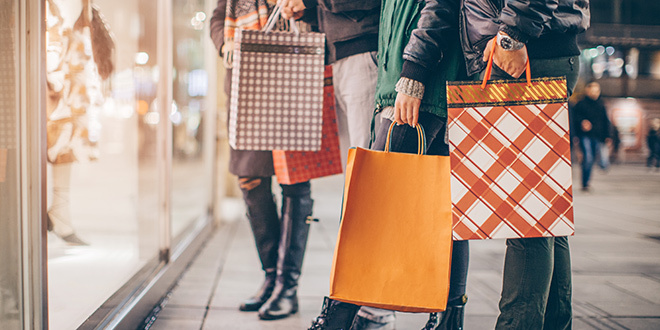 According to the National Retail Federation (NRF), 180 million Americans shopped during the five-day holiday spending period from Thanksgiving Day through Cyber Monday. When compared to the 186 million shoppers in 2020 and 190 million in 2019, the deceleration has been attributed to ongoing concerns about Covid and the supply chain, as well as customers who started their shopping earlier as retailers extended deals and other offers into October and early November.

The overall number of online shoppers decreased to a total of 127.8 million from 145.4 million last year. Similar to recent years, Black Friday surpassed Cyber Monday in terms of total online shoppers, with 88 million shopping online the Friday after Thanksgiving compared with 77 million on Monday. On Small Business Saturday, the NRF recorded 56.4 million online shoppers. The importance of supporting local businesses remained high, with 71 percent of customers indicating they were shopping specifically for Small Business Saturday.

Black Friday online sales growth reversed from the prior year for the first time, moving from $9 billion in 2020 to $8.9 billion in 2021. On Cyber Monday, consumers spent $10.7 billion, marking a 1.4 percent decrease from year-ago levels, according to data released Tuesday by Adobe Analytics and CNBC. As stated by Business Wire, projected spending among U.S. consumers who shopped at independent retailers and restaurants on Small Business Saturday reached an estimated $23.3 billion, up 18 percent from $19.8 billion in 2020 and an increase from pre-pandemic spending in 2019 ($19.6 billion).

The NRF expects holiday sales during November and December to rise between 8.5 percent and 10.5 percent, for a total of $843.4 billion to $859 billion in sales, which would set a record for year-over-year growth. Check out last year’s breakdown here.

Carly joined the NHPA staff in 2021 as an associate editor. Born and raised in Indiana, Carly earned a B.A. in English from Indiana University Bloomington. She enjoys reading, hiking, and cheering on the Indiana Hoosiers.
Previous Leading Your Business Through Delegation and Empowerment
Next Retailers Look for Ways to Combat Organized Theft