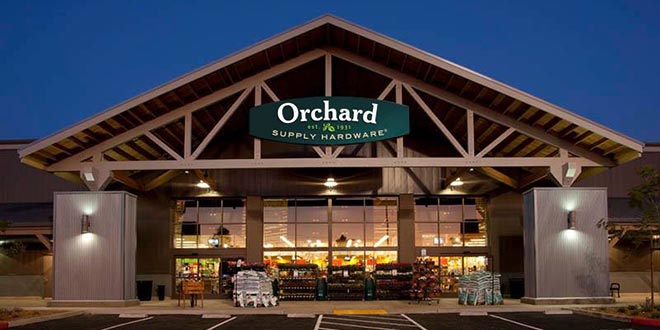 Lowe’s is growing its Orchard Supply Hardware chain, which the big-box retailer bought out of bankruptcy in 2013.

Orchard Supply Hardware is set to open nine new stores in 2016, growing its store count from 76 to 85, according to the Charlotte Business Journal. The company has locations throughout California and Oregon.

The chain is owned by Lowe’s, but remains a separate business unit. The business was founded in 1931 when 30 farmers considered buying their farm supplies as a cooperative. Each farmer contributed $30 and Orchard Supply was born, according to the store’s website.

Bob Tellier, president of Orchard Supply Hardware, says the company is predicting 33 percent new-store growth, with new locations that will follow the format the company has created. That format is typically a 25,000- to 28,000-square-foot store with a 3,000- to 8,000-square-foot nursery, according to the article from the Charlotte Business Journal.

Since the company was acquired by Lowe’s, it has focused its stores’ product mix on paint, repair, maintenance and backyard items.

Orchard Supply Hardware strives to complement the Lowe’s big-box stores, Tellier says. For one, it caters to demographics that are not typically attracted to Lowe’s stores, he says.

“We supplement their model because we are in between them and small, traditional hardware stores,” he says. “We’re convenience, we have depth and breadth, and honestly, the big boxes don’t. We appeal to a different demographic.”

A majority of Orchard Supply’s new locations will be opening in California cities, such as San Francisco.

Renee Changnon is the retail outreach coordinator for NRHA. She meets with retailers in their stores and at industry events and introduces them to the services NRHA provides. Renee previously worked as a member of the NRHA communications team. She earned a degree in visual journalism from Illinois State University, where she served as the features editor for the school newspaper. After college, she implemented marketing and promotions initiatives at Jimmy John’s franchise locations across the country. She enjoys exploring books with her book club, Netflix marathons and hosting goat yoga at her apartment complex. Renee Changnon 317-275-9442 rchangnon@nrha.org
Previous Retractable Screen Door
Next Home Electronics: The Niche Your Customers Are Looking For