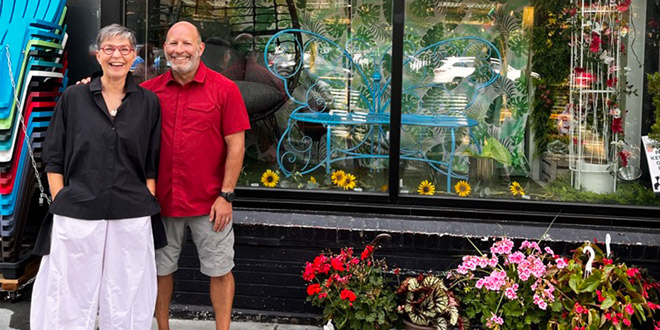 When Gina Schaefer opened her first hardware store in 2003, she had no idea what the future would bring. Shortly after shifting gears from a career in technology to owning and operating her own store, her husband Marc Friedman joined. As their business grew and they kept adding more locations, A Few Cool Hardware Stores was born.

“I was writing my email signature after we opened our third location and I didn’t want to say I was the ‘owner of’ and then name the three stores,” Schaefer says. “Instead I added the ‘owner of A Few Cool Hardware Stores.’ By the time we got to 12, ‘a few’ had stuck.”

After nearly 20 years in business running her stores in the mid-Atlantic, Gina recently launched her first book “Recovery Hardware: A Nuts and Bolts Story About Building a Business, Restoring a Community, and Renovating Lives.” Her memoir was inspired by the many employees she’s hired over the years, including those who are in recovery from addiction and the rewarding experience of giving second chances.

Schaefer was recently on NHPA’s Taking Care of Business podcast. In the episode, she spoke about the book, how she’s run her business over the years and even gave some suggestions for other retailers. Check out her tips for retailers below, and make sure to listen to the episode if you haven’t had a chance to yet.

Think Outside the Box When Hiring

Hiring and retaining quality employees has become a topic of concern for independent retailers for a while. However, Schaefer believes there are many ways to find and bring in new employees that are ignored in this process.

“We as a society tend to discount entire populations of potential applicants,” Schaefer says. “In my book, I talk about the first employee that stole from us. He was a middle-class, 26-year-old from Michigan whose family owned a small business. He was a college graduate and didn’t have a criminal past—nobody would have hired him and thought he might steal. But when I share with others that I hire people from a recovery program or a returning citizen they immediately think negatively. It was a really good lesson for me early on to level the playing field.”

Schaefer recognizes there is a risk in hiring any employee but says she strives not to judge someone by the best or worst thing they’ve ever done. In addition to welcoming those from the world of addiction recovery, she also has hired formerly incarcerated individuals, moms returning to the workforce and veterans.

Become a Part of the Community

Another great way to strengthen your operation is by getting involved with other local businesses, Schaefer says. To do this, she suggests finding ways to partner with other businesses in your community. When one of their stores turned 100 years old, they found a unique way to celebrate that milestone while also involving their neighbors.

“One of our stores turned 100 during the pandemic so we had to do something different than we originally planned,” she says. “We asked a local chocolate shop to name a chocolate after us, a brewery to name a beer after us and an ice cream shop to name a flavor of ice cream after us. It gave us a reason to talk about these businesses and built a strong camaraderie you won’t find with big box chains.”

Find a way to promote other businesses or get involved with your local chamber of commerce.

One way Schaefer recommends strengthening your company is by looking at your culture and the surrounding communities. Her hiring practices mean she makes sure her employees are members of the community they serve in Washington, D.C., and the Baltimore, Maryland, area. Perhaps there is a recovery community, a homeless community or veterans looking for work—what conversations can be had to address it directly instead of ignoring it?

“You don’t have to pick one particular group to work with,” she says. “First look at your own culture, examine where you think there might be an opportunity and then think about what your community has in terms of populations that might not be getting jobs and see if there is something that you can do there.”

While Schaefer recognizes hiring from alternative backgrounds might feel like a risk, she has found that their customers have been nothing but supportive and encouraging.

“We celebrate that we hire local folks from all walks of life and our customers love that,” Schaefer says. “When you open a store, it’s a blank slate, and then you get to see what the community helps you create out of it.”

Renee Changnon is the retail outreach coordinator for NRHA. She meets with retailers in their stores and at industry events and introduces them to the services NRHA provides. Renee previously worked as a member of the NRHA communications team. She earned a degree in visual journalism from Illinois State University, where she served as the features editor for the school newspaper. After college, she implemented marketing and promotions initiatives at Jimmy John’s franchise locations across the country. She enjoys exploring books with her book club, Netflix marathons and hosting goat yoga at her apartment complex. Renee Changnon 317-275-9442 rchangnon@nrha.org
Previous 10 Takeaways From the HIRI Summit
Next Nowco Home Hardware Recognized With Regional Award