Home » Promotions » A Busload of Reasons to Promote Local Teams 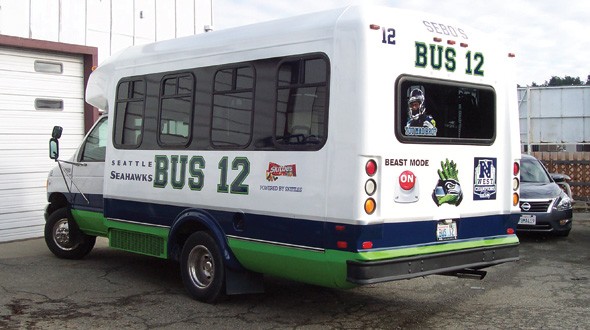 A Busload of Reasons to Promote Local Teams

An endcap with products that feature team logos, a special tailgating section in the spring or a few local teams’ flags as part of your store are good starts, but Dave Sem, owner of Sebo’s Do it Best Hardware & Rental in Anacortes, Wash., recently took his support of local sports to the next level, adding a Seattle Seahawks-themed party bus to his rental selection.

The used bus seats 10, plus the driver. Sem bought it last fall and updated it with Seahawks graphics on the outside and a new radio system on the inside.

“It’s still a work in progress,” he says. “We’re hoping to find a booth to put in the back so a few people can sit together and play cards.”

He plans to rent the bus out for $150 per day. It has few enough seats that a commercial driver’s license won’t be required, but he will ask all customers who rent it out to supply a copy of their drivers’ licenses and proofs of insurance.

The timing worked well, of course, with the Seahawks winning the Super Bowl. But the bus can be used for more than sports outings.

“We have a lot of wineries and breweries around here that offer tours, and there are plenty of festivals and other events that our customers would want to get a group together and go somewhere for the day,” he says.

So far, the bus seems to be doing a good job of advertising itself: “We took it to a few Seattle games earlier this year, and it gets a lot of attention. We’ve seen quite a few people taking pictures of it on their phones as we drive down the road.”

Liz is the special projects editor for Hardware Retailing magazine. She reports on news and trends, visits retailers, and attends industry events. She graduated from Xavier University, where she earned a degree in English and Spanish and was a member of the swim team. Liz is a Louisville, Kentucky, native who lives in Indianapolis with her husband and two children. She enjoys swimming, reading, doing home improvement projects around her house and cheering on her two favorite basketball teams, the Kentucky Wildcats and the Xavier Musketeers.
Previous Food for Thought: Taking Charity to the Next Level
Next Nuts and Bolts of Recent Retail Breaches