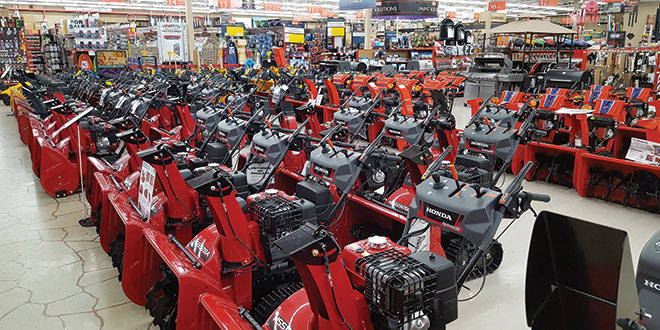 There’s a time in everyone’s life they’ve hoped for a big snowstorm. As a child, it gets you out of school. Another reason is if you bought a snowblower that season at Beisswenger’s Hardware and Power Equipment in New Brighton, Minnesota. Because if a winter storm hits on New Year’s Day, you may get your money back.

The promotion, which starts during the summer and ends in early December, states that anyone who bought a snowblower at Beisswenger’s that winter season will receive a full refund (minus taxes) if snowfall on New Year’s Day reaches 6 inches, according to measurements at the local airport. The promotion receives a lot of attention as the end of the year approaches, says sales manager Ray Pomerleau.

“We’ve come close one year, with around 4 inches falling once it was all counted. We actually really hope it happens; it’d be a great day for our customers. For them, it would be like winning the lottery. When you wake up on New Year’s Day, it just might be your lucky day,” Pomerleau says.

Chad is an assistant editor for Hardware Retailing magazine. A Purdue University graduate, Chad has covered sports and news at the high school, college and Olympic levels as a sports writer, editor and designer for multiple newspapers. Prior to joining the NRHA, he was the sports editor for the Herald Journal in Monticello, Indiana, and a designer and copy editor for the AIM Media Indiana group in Columbus, Indiana. When not cultivating his beard, he enjoys backpacking, cooking, traveling and watching too much sports and Netflix.
Previous Construction Screws
Next Lowe’s Becomes Official Home Improvement NFL Retail Sponsor

Dozens of firefighters at firehouses in Tucson, Arizona, are having an easier time firing up …