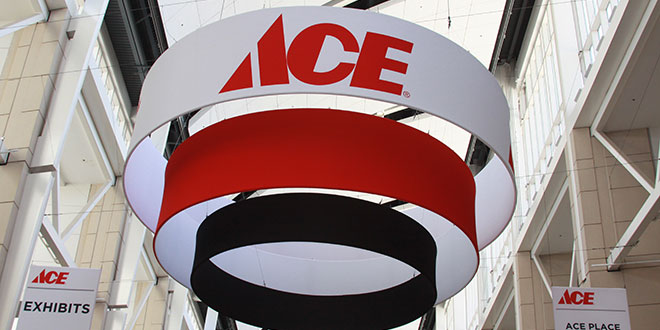 Ace Hardware Corp. today reported an increase in revenue over the previous year for the second quarter of 2017.

The co-op’s second-quarter 2017 revenues were $1.5 billion, an increase of $66 million, or 4.6 percent, over the second quarter of 2016, which is record revenue, according to the company.

Ace’s net income was $51.1 million, a decrease of $12.3 million from the second quarter of 2016. According to the company, it recorded $7.8 million of one-time pretax charges primarily related to the future closure of certain warehouse and distribution facilities as part of a network reconfiguration to support future growth.

“We are pleased with the 3.2 percent same-store sales increase that fueled our record revenue and second quarter increase of 4.6 percent,” says John Venhuizen, Ace president and CEO. “And I couldn’t be more proud of our local Ace owners for being named ‘America’s favorite home improvement store,’ by Market Force Information and for ranking ‘highest in customer satisfaction,’ by J.D. Power for the 11th consecutive year.”

During the first half of 2017, Ace retailers saw 3.2 percent retail same-store sales and a 3.9 percent increase in average transaction size, the co-op reports.

Total wholesale revenues were $1.4 billion, an increase of $63.1 million, or 4.7 percent, compared to the second quarter of 2016. Increases were noted across most categories, with outdoor living, housewares, impulse and tools showing the largest increases in revenue.

Retail revenues from Ace Retail Holdings, which operates the Westlake Ace Hardware chain, were $90.3 million in the second quarter, for a 3.3 percent increase from the year prior.

Renee Changnon is the retail outreach coordinator for NRHA. She meets with retailers in their stores and at industry events and introduces them to the services NRHA provides. Renee previously worked as a member of the NRHA communications team. She earned a degree in visual journalism from Illinois State University, where she served as the features editor for the school newspaper. After college, she implemented marketing and promotions initiatives at Jimmy John’s franchise locations across the country. She enjoys exploring books with her book club, Netflix marathons and hosting goat yoga at her apartment complex. Renee Changnon 317-275-9442 rchangnon@nrha.org
Previous Home Depot Reports Historic Quarterly Sales
Next Forward Action Stapler