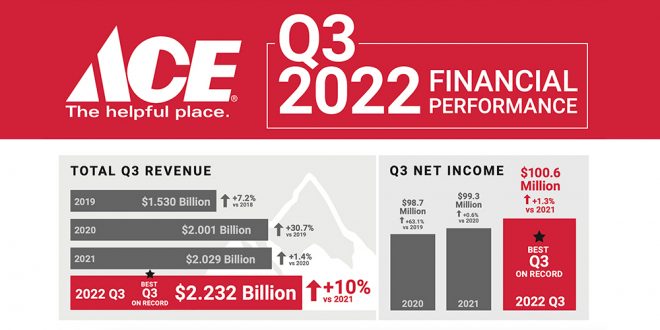 “My sincere thanks to the entire Ace team for their determined and relentless pursuit of our three strategic imperatives—service, convenience, and quality—which delivered yet another quarter of record sales and profit,” says John Venhuizen, Ace Hardware president and CEO. “Revenue and income were up 10% and 1.3% respectively for the quarter. They now stand 44% and 66% higher than just three years ago. Despite, and in some cases because of rampant inflation, the Ace team continues to deliver superior financial results and exceptional customer service to and for our neighbors.”

The approximately 3,600 Ace retailers who share daily sales data reported a 5.8% increase in U.S. retail same-store sales during the third quarter of 2022. Estimated retail inflation of 11.2% helped drive the 9.5% increase in average ticket. Same-store transactions were down 3.4%.

Consolidated revenues for the quarter that ended October 1, 2022, totaled $2.2 billion. Total wholesale revenues were $2 billion, an increase of $198.9 million compared to the prior year’s third quarter. Increases were seen across several departments with holiday, paint and outdoor power equipment showing the largest gains. Wholesale merchandise revenues to new domestic stores activated from January 2021 through September 2022 contributed $51 million of incremental revenues during the third quarter of 2022, while wholesale merchandise revenues decreased $11.6 million during the third quarter due to domestic stores whose memberships were canceled. Wholesale merchandise revenues to comparable domestic stores increased $122 million for the quarter. All of this increase was the result of estimated wholesale price inflation of 12.7%.

Receivables increased $100.3 million from the third quarter of 2021 due to higher sales volumes and datings for seasonal programs. Inventories increased $228.4 million from the third quarter of 2021. Approximately half of this increase is due to vendor cost inflation while the remainder is due to the intentional build-up of inventory as a hedge against supplier shortages and to increase fill rates to Ace Owners. The late arrival of spring weather in 2022 resulted in an overstock of patio and lawn, and garden inventory that will be carried over into the 2023 spring selling season.

Lindsey joined the NHPA staff in 2021 as an associate editor for Hardware Retailing magazine. A native of Ohio, Lindsey earned a B.S. in journalism and minors in business and sociology from Ohio University. She loves spending time with her husband, two kids, two cats and one dog, as well as doing DIY projects around the house, going to concerts, boating and cheering on the Cleveland Indians.
Previous Home Improvement Operations Share Q3 Financials
Next Krylon Names Spanish Moss as 2023 Color of the Year 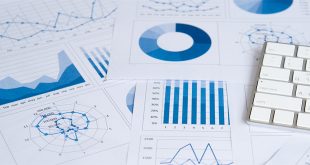