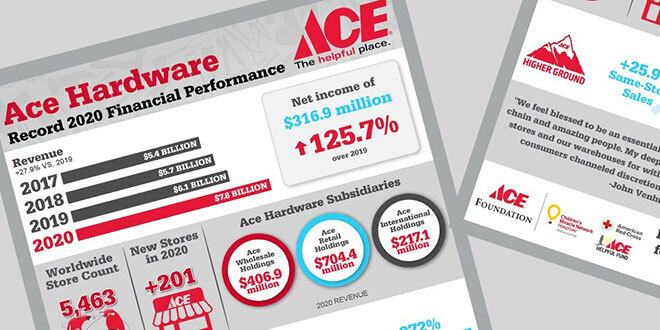 “The fourth quarter was yet again one of the most extraordinary in Ace’s history,” says John Venhuizen, President and CEO. “We’ve always believed that we were blessed to be in the business of serving others. And now, after a year like 2020, we feel blessed to be an essential retailer with strong suppliers, an expansive supply chain and amazing people. Ace employees in our stores and our warehouses withstood the massive surge in demand as consumers channeled a disproportionate share of their discretionary spending into their homes and gardens.”

E-commerce revenue for Ace rose 214 percent during the fourth quarter of 2020 and were up nearly 26 percent from fiscal year 2019.

Ace Hardware currently operates 5,463 stores worldwide and opened 201 stores in 2020. In addition, the company raised more than $18 million for its charitable partners and programs.

Todd is trends editor for Hardware Retailing magazine. He graduated from Indiana University where he majored in journalism and French. Throughout his career, he has aimed to highlight small businesses and their community value. He joined NRHA in 2017.
Previous Made in USA Good for Growth
Next House-Hasson Hardware President Don Hasson Dies