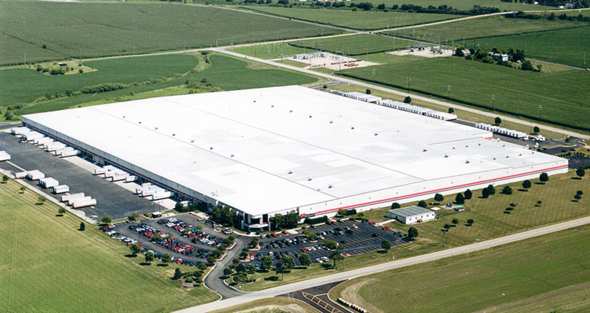 Ace Hardware is making efforts to reduce its carbon footprint in how it operates its logistics and supply chain systems, including at existing and new facilities throughout its Retail Support Network across the U.S.

Two new Retail Support Centers are scheduled to open this year in Wilmer, Texas, and West Jefferson, Ohio. Both will open with energy-efficient, motion-detection lighting as well as power equipment that will run on hydrogen fuel cell technology. This advancement replaces traditional batteries that are charged using electricity. Instead, hydrogen is created on-site to fuel the batteries—the only byproduct of which is pure deionized water.

Several of Ace’s Retail Support Centers have also swapped out energy draining fluorescent lighting for more efficient LED options. In Sacramento, Facilities Manager Reid Barney projects 1.2 million kilowatt hour savings in 2014 and nearly $200,000 in costs avoided. An additional factor Ace facilities consider is energy demand. In Sacramento, Ace has reduced its energy demand on the power grid by more than one third in less than three years. At Ace’s Retail Support Center in Princeton, Ill., the 1,100,000-square-foot facility transitioned from 400 watt metal halide lighting to LED. In addition to projected energy and cost savings estimated at roughly $300,000 in 2014, LED lighting will significantly reduce the temperature in the warehouse during the summer months, further reducing energy consumption.

Ace’s transportation fleet has been certified as part of SmartWay®, a program through the Environmental Protection Agency. SmartWay encourages businesses to manage their transportation and logistics in an environmentally responsible manner. Ace Hardware is certified as both a SmartWay Shipper and a SmartWay Carrier. As a SmartWay Shipper since 2009, Ace Hardware only contracts with approved SmartWay carriers for a majority of its freight operations. Ace Hardware received designation as a SmartWay Carrier in 2013, meaning that Ace is committed to improving its fleet efficiency and reducing its impact on the environment. Technology onboard Ace’s private fleet also drives improvement for Ace Hardware’s sustainability efforts. Onboard technology systems track hours-of-service with e-logs and views critical events such as hard braking, stability control and excess speed. At each Retail Support Center, tractors get a weekly scorecard for MPG and fuel consumption. Between 2010 and 2011, the fleet gained 10 percent greater efficiency in the use of drivers and equipment by re-optimizing each route.

Amanda Bell was an assistant editor of Hardware Retailing and NRHA. Amanda regularly visited with home improvement retailers across the country and attended industry events and seminars. She earned a degree in magazine journalism from Ball State University and has received honors for her work for Hardware Retailing from the Association of Marketing and Communication Professionals.
Previous Report: Wealthy Prefer Home Depot for Home Improvement Shopping
Next Founder, Chairman of Adams Manufacturing Presented with 2014 Inventor of the Year Award