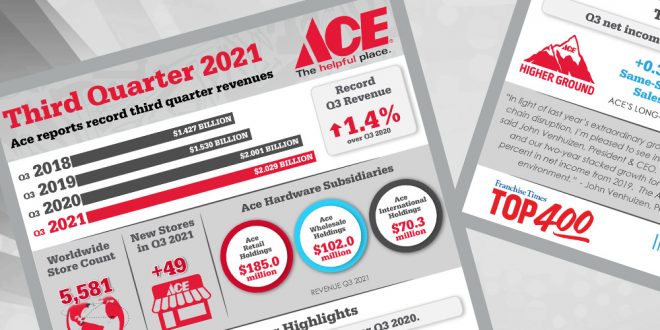 Ace Hardware released its third quarter financial report this week, reporting record Q3 revenues of $2 billion, an increase of 1.4 percent on top of last year’s increase of 30.7 percent. It also posted a record net income of $99.3 million, up 0.6 percent. Accrued patronage dividend to shareholders was $296.3 million, up 12.3 percent from the first nine months of 2020.

“In light of last year’s extraordinary growth, and despite significant headwinds from global supply chain disruption, I’m pleased to see increases in both the top and bottom line for the quarter,” says John Venhuizen, president & CEO. “We added to 2020’s unprecedented surge in business, and our two-year stacked growth for the third quarter is up 32 percent in revenue and 64 percent in net income from 2019. The Ace team continues to serve and support in a difficult environment.”

U.S. retail same-store-sales rose 0.3 percent during the third quarter of 2021, the result of a 7.5 percent increase in the average transaction ticket. Other accomplishments in the third quarter included moving to the 4th largest franchise system in Franchise Times Top 400.

Lindsey joined the NHPA staff in 2021 as an associate editor for Hardware Retailing magazine. A native of Ohio, Lindsey earned a B.S. in journalism and minors in business and sociology from Ohio University. She loves spending time with her husband, two kids, two cats and one dog, as well as doing DIY projects around the house, going to concerts, boating and cheering on the Cleveland Indians.
Previous Big-Box Q3 Financials Round-Up
Next Download the Small Business Rising Holiday Toolkit