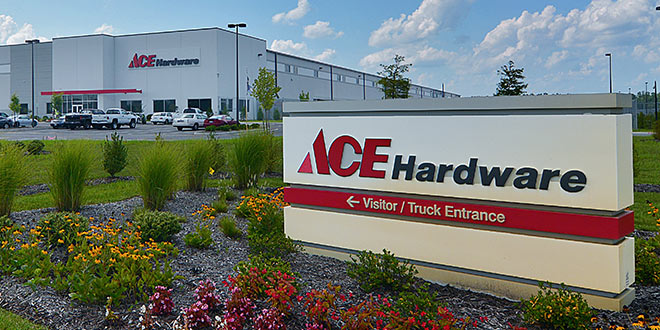 Ace Hardware Corp. plans to restructure its East Coast distribution network—a move that includes closing both of its Emery-Waterhouse warehouses and building a new 1.1 million-square-foot facility, according to Ace.

The consolidation of Ace’s distribution facilities is coming after a rigorous analysis of the co-op’s overall distribution network, including its wholesale division, the company says.

The goal is to strengthen the cooperative’s total distribution network in anticipation of continued growth, the company says.

The co-op announced this month that it had hired Grainger executive Mark Spanswick to lead Ace Wholesale Holdings’ expansion.

“Ace Hardware intends to grow even more aggressively over the next several years. As a result, we are augmenting our distribution capabilities to be faster, nimbler and stronger than ever before,” says Lori Bossmann, executive vice president of supply chain, inventory replenishment and retail support.

Ace bought Emery-Waterhouse, a 175-year-old distributor of hardlines products, in 2014. The regional distributor services independent lumber, paint, industrial and hardware outlets throughout the Northeast, and operates as a division of Ace Wholesale Holdings.

As part of the consolidation, Ace will close its retail support center in Prince George, Virginia, a small cross dock in the Baltimore area, and the facilities that housed all of Emery-Waterhouse’s distribution operations. The two Emery-Waterhouse warehouses are located in Portland, Maine, and Pittston, Pennsylvania. The Portland distribution center is 250,000 square feet in size and the Pittston facility is 200,000 square feet, according to Ace.

“We are grateful for the service our team members at these facilities have provided to Ace Hardware and Emery-Waterhouse, and we will work with compassion to ensure a smooth transition during this period of change,” Bossmann says.

“While not effected today, those positions may evolve over the next two years,” she says.

The changes to Ace’s East Coast retail support network will take place in phases over the next 24 months, with the new retail support center in Fredericksburg, Pennsylvania, and existing, recently expanded facility in Wilton, New York, absorbing distribution operations for the region.

Ace bought Jensen Distribution Services, a distributor of hardlines goods based in Spokane, Washington, in 2015.

Kate is profiles editor for Hardware Retailing magazine. She reports on news and industry events and writes about retailers' unique contributions to the independent home improvement sector. She graduated from Cedarville University in her home state of Ohio, where she earned a bachelor's degree in English and minored in creative writing. She loves being an aunt, teaching writing to kids, running, reading, farm living and, as Walt Whitman says, traveling the open road, “healthy, free, the world before me.”
Previous Locking Impact Extension Tool
Next Selling to Animal Owners, Even if Pet Products Aren’t Your Niche