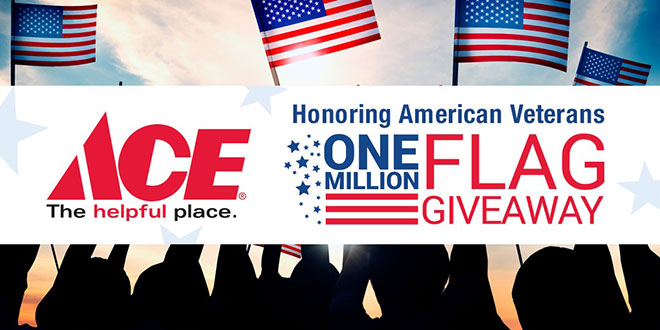 On May 26, participating Ace Hardware stores throughout the U.S. will give away free flags for Memorial Day, which is May 28. Ace Hardware Corp. will donate flags to VFW posts in the communities where the participating stores are located.

Horizon Ridge Ace Hardware is located in Henderson, Nevada, in an area near Las Vegas that includes a large veterans’ retirement community. About 20 percent of the store’s customers serve or have served in the military, owner Renee Hoffman says.

Hoffman’s father and grandfather were in the Navy, and one of her current star employees served in the U.S. Air Force during the Vietnam War.

Every business needs to contribute to a larger mission than earning money, Hoffman says. Directly supporting veterans helps her answer the question of why she does what she does when she runs her store, she says.

Hoffman has about 300 flags to give to customers on May 26. If she runs out of the 8-inch-by-12-inch flags, she will send shoppers home with smaller flags, instead, she says.

“If you come into my store that day, you’re going to get something,” she says.

Hoffman has hired veterans, offers discounts to current and retired military personnel and has marked a veteran-only parking spot in front of her store.

“We try to thank them every time they come in,” Hoffman says. “I’ve learned so much from the veterans who worked for me. These are the guys who have made it possible to have the lives that we have.”

The flags Ace Hardware donates to the VFW posts will be used to honor veterans’ graves, according to the co-op. The company’s goal is to give 500,000 flags to customers and 500,000 to the VFW.

“We are thrilled to continue our long-standing history of honoring veterans by supporting VFW posts and local communities this Memorial Day,” says  John Surane, executive vice president for Ace Hardware. “The sacrifices that these men and women have made for their country is something that should be recognized every day, and we at Ace want to make this Memorial Day even more meaningful.”

Kate is profiles editor for Hardware Retailing magazine. She reports on news and industry events and writes about retailers' unique contributions to the independent home improvement sector. She graduated from Cedarville University in her home state of Ohio, where she earned a bachelor's degree in English and minored in creative writing. She loves being an aunt, teaching writing to kids, running, reading, farm living and, as Walt Whitman says, traveling the open road, “healthy, free, the world before me.”
Previous Orgill Honored With Presidential Export Award
Next Dry Erase Paint