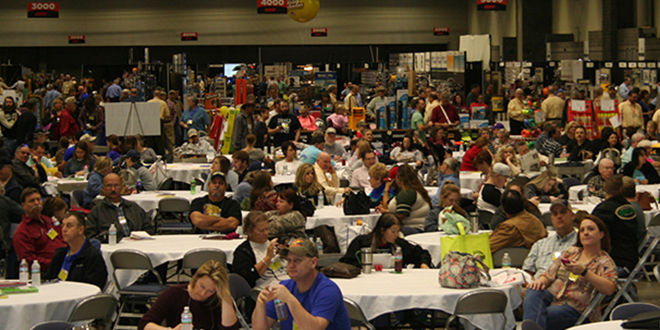 Hardware Distribution Warehouses, Inc. (HDW) just wrapped up its most successful HDW market since its inception in 1994. The recent acquisition of World and Main Houston, formerly known as Handy Hardware, plus the continued support of HDW’s original dealer base were all contributing factors, according to CEO and president Kenneth R. Beauvais.

“The teamwork from all employees working under extreme deadlines was remarkable,” Beauvais says. “To pull this off in such a short framework of time with the success we experienced was simply amazing. Record sales numbers with an attendance of over 500 dealer stores represented at the market shows that teamwork equals results.”

With more than 450 vendors attending the market, Pat Willey of Belmont Enterprises says “several dealers told [him] that they had traveled six hours by car just to be at the market to participate in the specials offered.”

Additionally, Willey says conversations were able to take place among retailers about HDW.

“We shared with all of the Houston customers our experience with the HDW team and how they help facilitate for their dealers a level of support that helps the dealer not only merchandise their store, but position themselves to compete with the big boxes,” Willey says. “HDW is a customer-focused company, and that level of commitment was very evident.”

The three-day event ran from Friday, Jan. 20 through Sunday, Jan. 22. To kick off the market, Sundance Head, a winner from the singing competition “The Voice”, held a private concert for attendees.

“I was apprehensive when I first got there, having been a Handy dealer for many years,” Terry says. “I’m so glad we attended. We definitely see a turn for the better. I am excited that the company is getting back to hardware management people. I have known many vendors for years and all the vendors were also positive and excited about the change.”

Richie Fulgham, owner and manager of Homefront Home Improvement in Greenwood, Mississippi, has been attending HDW markets since his store opened.

“There were more product offerings than before with some of the best pricing I have seen at any market,” Fulgham says. “When I go to market, I am looking for everyday items at a discounted price, as well as new items I can sell on endcaps. I was able to purchase all of those at the HDW market.”

The market closed Sunday at noon with total cash and prizes being awarded to attending dealers that totaled over $100,000.

Renee Changnon is the retail outreach coordinator for NRHA. She meets with retailers in their stores and at industry events and introduces them to the services NRHA provides. Renee previously worked as a member of the NRHA communications team. She earned a degree in visual journalism from Illinois State University, where she served as the features editor for the school newspaper. After college, she implemented marketing and promotions initiatives at Jimmy John’s franchise locations across the country. She enjoys exploring books with her book club, Netflix marathons and hosting goat yoga at her apartment complex. Renee Changnon 317-275-9442 rchangnon@nrha.org
Previous House-Hasson Expects Boost in International and Amish Attendees at Dealer Market
Next Mini Propane Torch