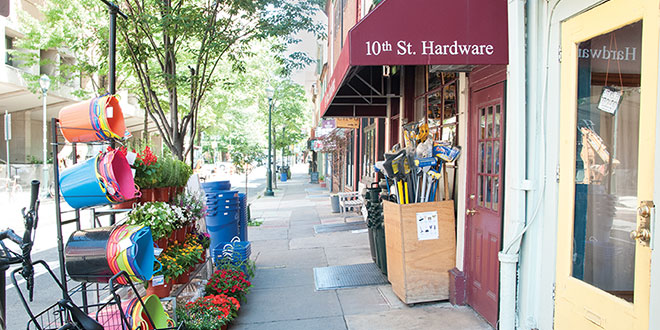 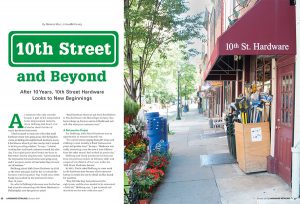 10th Street and Beyond 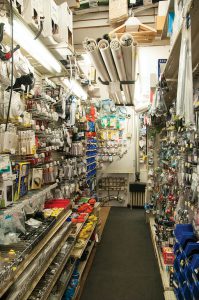 As someone who only recently became a part of the independent home improvement industry, Steve DeShong had heard a lot of stories about the fate of small hardware businesses.

“I had accepted as some sort of fact that small hardware stores were going away, that the big-box stores are killing all neighborhood hardware stores. I don’t know where I got that exactly, but it seemed to be the prevailing wisdom,” he says. “I started working here and heard customers remark day after day, ‘I’m so glad you’re here! It takes me hours to find what I need at a big-box store.’ I previously had the impression that small stores were going away, and it was just a matter of time before they all went out of business.”

DeShong joined 10th Street Hardware in 2015 as the store manager, and he has co-owned the business with his partner Troy Usnik since 2007. Usnik has worked in the business for more than 30 years.

So, what is DeShong’s takeaway now that he has had a hand in reinventing 10th Street Hardware in Philadelphia over the past two years?

“Small hardware stores are not dead, don’t believe it. You don’t have to be Home Depot to thrive. You have to keep up, but you can be old-fashioned and still offer what your customers want.”

For DeShong, 10th Street Hardware was an opportunity to reinvent himself, too.

“I’ve owned stores ranging from gift shops and clothing to most recently a floral business and plant and garden store,” he says. “Hardware was really interesting to me because it was different from the other stores I had worked in previously.”

DeShong and Usnik purchased the business from its previous owners in February 2007 and reopened it in March of that year under the 10th Street Hardware banner.

In 2015, Usnik asked DeShong to come work in the hardware store because of his extensive history in retail, his eye for detail and his knack for numbers.

“Troy felt like they had plateaued after eight years, and the store needed to be reinvented a little bit,” DeShong says. “I got involved and started to see the store with new eyes.”

In a retail space that is just over 1,100 square feet, DeShong says 10th Street isn’t the smallest salesfloor he has worked in, but it has the most SKUs and the highest sales volume per square foot that he’s ever managed.

“Most of the other businesses I had before relied on displays and merchandising because customers were buying more on impulse,” he says. “With hardware, obviously those things are important, but maintaining inventory is of a much higher importance. When customers come to you because they see you as a source for a specific home repair item and you don’t have it, they will stop coming back quickly.”

When DeShong came into the business, his new vision was for 10th Street Hardware to be the place where customers could always find what they need.

Along with visual changes, like updating the logo, adding lighting in the store and implementing regular cleaning and store maintenance tasks, DeShong also updated  the day-to-day processes. He brought in a new POS system and streamlined the order receiving process.

The goal of these changes, DeShong says, was to make the store more user-friendly, and he says the responses from customers on the changes they have made so far have been positive.

“There is a natural human instinct to resist some change, but generally, customers like to see that you’re paying attention to your store,” he says.

Customers also like when you pay attention to them, which is something DeShong shares with his whole team.

“About 20 or 30 years ago, the city of Philadelphia created a development district here and started converting some of the vacant lots, so the customer base for the store was more contractor-focused,” he says. “During that period, the store served some of the renovation business.”

Within the last decade, DeShong says he and Usnik noticed a change in the neighborhood, with pizza shops and sandwich places transitioning into trendy restaurants that serve craft beer and farm-to-table food and apartment renovations bringing in higher-end customers.

“Something I’ve always tried to do in my businesses is listen to the customers and watch.
If you bring a new item in and no one buys it, it needs to go no matter how much you like it.”

As those customers found the store, 10th Street Hardware adapted its product mix to reflect what they were looking for.

“What we sold had to morph into more housewares and apartment accessories versus products for contractors who were renovating, taking down walls and rewiring,” he says. “Something I’ve always tried to do in my businesses is listen to the customers and watch. If you bring a new item in and no one buys it, it needs to go no matter how much you like it. The same is true for bringing in something customers ask for. It’s important to have what they are buying.”

The No. 1 category at 10th Street Hardware is housewares, and the product offerings are broad, from batteries and mousetraps to steam irons and French presses.

“I don’t know if this is a Philly thing, but a lot of people come in and start with a negative. They say ‘I bet you don’t have this’ or ‘I don’t think you have this, but…’” DeShong says. “It’s amazing how often we can turn it around and say, ‘No, that’s not crazy. Of course we have that.’”

In addition to apartment-dwelling consumers, 10th Street Hardware has a professional customer base made up mostly of maintenance workers from surrounding apartment buildings. DeShong says these customers come in for products, like spackle, for small renovations, and services, such as lock rekeying.

Along with lock rekeying and key making, 10th Street Hardware offers other services customers may not expect in a store with such a small footprint. The store has a chopsaw in the basement to cut pieces from the small selection of lumber and PVC pipes they sell. They also cut glass and plexiglass.

Those types of services are usually requested by homeowners or renters who are working on small crafting or DIY projects, DeShong says.

The store’s proximity to both the neighborhood hospital and local universities brings in a mix of customers looking for unique items for projects, whether it’s students buying gas pipe nipples and flanges for an art assignment or someone from the hospital lab coming in for containers, DeShong says.

In order to meet the needs of the varied customer base, DeShong says his hiring strategy is to look for people who are similarly varied. The store currently has 11 employees, including DeShong and Usnik.

“We really like to have a diverse staff, and we try to find people who come from different backgrounds,” DeShong says. “We find the right people by asking our customers, especially our contractors and maintenance customers, if they know anyone who is looking for work.”

DeShong says having a mix of employees helps satisfy any preconceptions—whether accurate or not—that customers may have about who they want to see working in the store.

“There are so many dialects, and sometimes the word for a tool in one dialect doesn’t mean the same thing in another, so we ask them to point to what they need so we can learn.”

DeShong says the store’s Spanish-speaking customer base isn’t large, but it is consistent, with at least one customer per day coming in who prefers speaking Spanish. DeShong and another employee are interested in learning the language to create an environment where Spanish-speaking customers are comfortable. DeShong has spent time in Mexico, which piqued his interest in learning Spanish, and he has taken language classes in Philadelphia.

“We recently hired a team member from Peru who can help us with Spanish-speaking customers,” he says. “We have quite a few customers who are accustomed to having Spanish-speaking assistance, so we keep a Spanish hardware dictionary at the register that has all the hardware-specific words in it.”

DeShong and his team also rely on the customers to help them learn.

“There are so many dialects, and sometimes the word for a tool in one dialect doesn’t mean the same thing in another, so we ask them to point to what they need so we can learn.”

DeShong says learning and speaking Spanish in the store isn’t something he feels obligated to do, but it’s a way to show customers they are welcome and to celebrate the differences in the neighborhood.

“Customer diversity is a good thing, and the diversity of our neighborhood makes our lives richer,” he says. “We can learn something and find out about people from different places.”

While the current plan for 10th Street Hardware’s future doesn’t have a drastic course shift in the works, there is plenty to develop for the owners’ next endeavor: a second location.

“The new store is in Old City, which is a totally new neighborhood for us,” DeShong says. “The demographics are a little different from this one. It’s on a much artsier, more upscale street, and the store is about 50 percent larger than this one. We will be able to spread things out. We’re not looking to add SKUs. We’re looking to do better displays and carry a different product mix.”

When DeShong and Usnik were searching for a second location, they wanted to make sure the neighborhood was the right fit for the operation.

“We started spending time there in those neighborhoods, going out to dinner, seeing how many people were out and about, going out to lunch to see who was shopping,” he says. “We found a location in Old City, and originally we were unsure because a friend had opened a hardware store there and closed it about 10 years ago, and no other hardware store had gone into that area since then.”

Once DeShong and Usnik saw the space and considered how much the neighborhood had changed in 10 years, they knew they had found the right location.

“It has hardwood floors, and it’s the right size,” DeShong says. “We signed a lease and took occupancy in early September. Now we are working with an architect to develop the general store design. I’m concerned about keeping a nice, clean consistent look with our shelving and displays.”

DeShong says he sees Amazon and other local retailers, like general stores, as his primary competition. The new store will address that competition through a new service, which they are considering implementing at the 10th Street location once it has been tested at the new store.

“We would like to offer some kind of limited delivery service to apartment buildings in the area with a doorman to start,” DeShong says. “We just need to establish the systems to handle it.”

Melanie is the managing editor for the North American Hardware and Paint Association. She has worked for the association since 2016. In her spare time, she enjoys cooking and baking without recipes and watching online makeup tutorials. She and her husband are raising their son and two fur children in Indianapolis.
Previous ‘Dark Store’ Tax Loophole Hits Small-Town Budgets
Next Generation Z: Reaching the Next-Gen Consumer 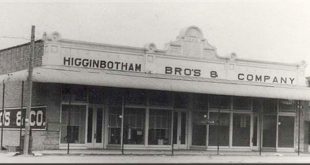 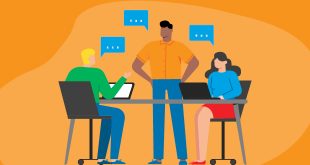 Apply for NHPA’s Online Course on Leading Your Team 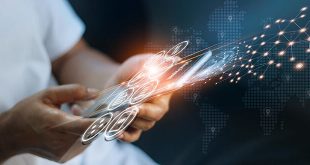