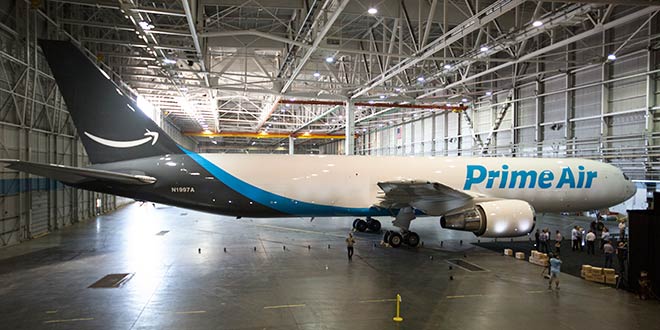 Amazon has rapidly amassed its own delivery fleet of trucks and cargo planes, now competing with the companies that used to deliver millions of its boxes.

As of August, the e-commerce retailer now owns 4,000 truck trailers and leases 40 jets, according to an article from Bloomberg. Amazon has built an extensive logistics system, including warehouses spread throughout the U.S.

That system allows the company to avoid overwhelming FedEx and UPS with vast numbers of packages, while making deliveries faster, the article says.

“In short, Amazon is becoming a kind of e-commerce Walmart with a FedEx attached,” the article says. “With any other company, an expansion like this would be preposterous. But Amazon’s growth has been preposterous. […] The company is the fifth-most valuable in the world.”

Why did Amazon choose to develop its own delivery system?

“By 2011, a former Amazon executive says, the company realized it would soon overwhelm FedEx and UPS during the holidays,” according to Bloomberg. “So, he says, Amazon decided to create an alternative.”

The other delivery companies are concerned, even if they don’t say so publicly, the article says.

“The fear has spread to Wall Street, where analysts say investors worry about what Amazon’s strategy means for the shipping industry,” the article says.

Kate is profiles editor for Hardware Retailing magazine. She reports on news and industry events and writes about retailers' unique contributions to the independent home improvement sector. She graduated from Cedarville University in her home state of Ohio, where she earned a bachelor's degree in English and minored in creative writing. She loves being an aunt, teaching writing to kids, running, reading, farm living and, as Walt Whitman says, traveling the open road, “healthy, free, the world before me.”
Previous Survey: Provide Feedback on Your Distributor
Next The Personal Side of Selling Your Business