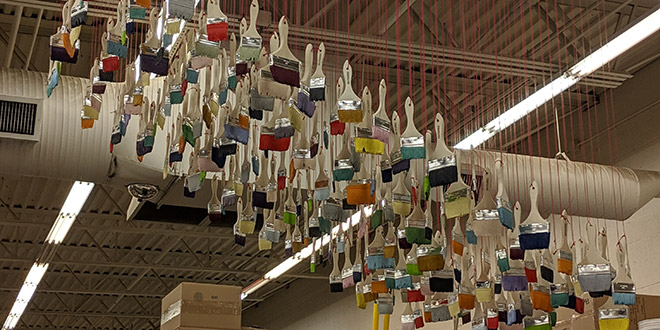 The ceiling over the paint department at Ambridge Do it Best Home Center in Ambridge, Pennsylvania, has an art installation the staff spent three months developing and hanging.

Store employees took about 100 paintbrushes, dipped each one in a different paint hue, let them dry and then hung them from the ceiling in a colorful cascade.

The staff talked about the project with customers while it was in progress, trying to build suspense and excitement, general manager David Strano says.

Strano got the idea for the art piece from a display in a clothing store and his team made it a reality.

“It’s like a waterfall of paintbrushes,” he says. “It’s a very good focal point in the department and it makes people realize that we’re different from other stores.”

Click through the photos in the gallery below to see Ambridge Do it Best’s process for creating its paint department work of art.

Kate is profiles editor for Hardware Retailing magazine. She reports on news and industry events and writes about retailers' unique contributions to the independent home improvement sector. She graduated from Cedarville University in her home state of Ohio, where she earned a bachelor's degree in English and minored in creative writing. She loves being an aunt, teaching writing to kids, running, reading, farm living and, as Walt Whitman says, traveling the open road, “healthy, free, the world before me.”
Previous Rubber Sealant
Next Leather Belts