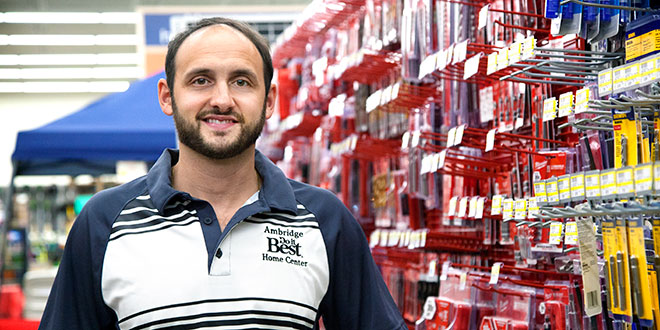 As far as independent home improvement operations go, Ambridge Do it Best Home Center in Ambridge, Pennsylvania, may be considered young, but that hasn’t stopped the operation from growing through a challenging economy in a small town. One of the tools partner David Strano has used to help spur growth is social media.

“I was one of the pioneer users of Facebook when it started,” Strano says. “I understood it, and it came naturally to me, so I made a page for the business in 2010.”

Strano says managing social media and growing followers is a balancing act between planning out content while also being ready to connect in the moment.

“It’s not sending a flyer where you have to plan for months in advance,” he says. “It’s also not always about selling. We use it to recognize employees’ birthdays and work anniversaries. Customers like to see pictures of their favorite employees.”

Strano also uses Facebook to drive same-day sales. After New Year’s Day, for example, he posted on Facebook that all holiday decor was 70 percent off—and he says the return was immediate.

“That post drove people in right away,” he says. “We got a lot of questions and feedback on that post because people like to engage with that. A lot of people shared that post, which broadens your reach and gets your name out to more people.”

Strano says it wasn’t easy or fast to grow the company’s followers on social media, but by posting consistent, relevant content and engaging with customers, he has been able to bring in nearly 8,000 followers.

Strano also uses seasonal contests to gain followers and bring in new customers. In the spring, he hosts a pet photo contest. Customers post pictures of their pets, and whoever gets the most reactions wins a prize. During the holidays, he runs a 12 Days of Christmas giveaway. He uses donated products from vendors, so the contest itself doesn’t cost too much.

“We gain about 500 followers each year only through these kinds of contests,” Strano says.

The latest addition to the Ambridge social media family is Instagram, which Strano launched in 2016. Their account is still growing, but Strano says he benefits from his personal use of the platform.

“I prefer Instagram for my personal use, so I’m familiar with it,” he says. “If I want to get a new product out there that I think is exciting, it’s easy to snap a photo and share it to get other people excited about it, too.”

Strano’s father Frank started a home remodeling supply company about 40 years ago, and it later evolved into a hardware store in the early 1980s. The company had worked with two previous co-ops before switching to Do it Best in 2007.

“We were able to grow during the recession because we had Do it Best,” Strano says. “The biggest advantage for us was that they didn’t push programs on us. They gave us flexibility and let us be independent, but we still have them to back us up when we need them.”

Strano has worked in the business in some way since he was a child. He worked part time in the store in high school and pursued a degree in business and marketing with the intention of returning to the family business after college.

“I started off working in receiving and stocking and outside in lawn and garden. I worked in every department, and I worked my way up to floor manager,” he says. “Not long after, I moved to the back office.”

In 2010, the Strano developed a secondary business called Incom Supply, an industrial and commercial sales business that is also backed by Do it Best.

“In our community, there are a lot of steel mills and other plants,” he says. “We wanted to have a business that could accommodate walk-in sales for those types of operations.”

In 2015, they also opened a paint store in Pittsburgh that serves mostly contractors, which is new territory for the company.

“It’s a whole new ballgame,” Strano says. “The competition in the area is pretty intense, so you have to have the right people and the right sales staff. We’re still learning to this day, but it’s been growing over the last few years.”

With the new paint venture underway, Strano and his father found an opportunity to grow the home center side of their business, too.

“We always talked about opening up a second hardware store,” he says. “We envisioned a second store in a growing, vibrant area. Our Do it Best territory manager came to us in late 2016 with the news that the Sears in Hampton was going out of business.”

The Stranos worked with Do it Best to open Hampton Do it Best Home Center—a 25,000-square-foot store—in the old Sears building. Now that the pair are operating four businesses—two home centers, a paint store and the industrial supply business—Strano says they don’t have any immediate plans for additional expansions.

But looking ahead to the future to a time when his father has retired from the business, Strano doesn’t want to overlook anything that would be beneficial for the business.

“If an opportunity would arise, I would look into it if I thought it was right for business,” he says. “But I want to be doing the best I can do or I don’t want to do it. I want to give it my all.”

Melanie is the communications and content manager for the North American Hardware and Paint Association. She joined the NHPA team in 2016 as an editor for Hardware Retailing and now helps lead the communications team to deliver relevant, timely content to the industry.
Previous Exclusive Q&As With Do it Best Executives
Next Starr Q&A: Do it Best CEO Talks Co-Op’s Core Values and Strategic Goals