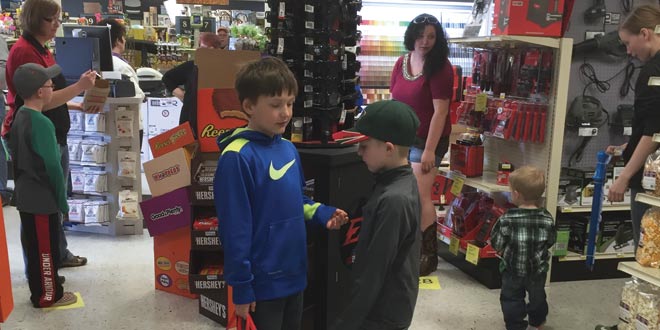 It’s usually difficult to get children to stand still for very long, but Kami Underdahl managed to do it… at least for a few minutes. The children in her store were playing Floor Bingo, one of the activities she created as part of the store’s grand opening event this past May.

To play, each child had to stand on one of the specially marked “bingo squares” on the floor and wait for their number to be called. Those standing on winning squares received a prize.

Underdahl Hardware Hank in Red Lake Falls, Minnesota, is the third in the family’s collection of stores in northern Minnesota. As Underdahl invited the community to celebrate the grand opening, she wanted it to be a family event. Any time there’s a special event, she looks for ways to include children in on the fun.

Earlier this year, Underdahl celebrated the 10th anniversary of her store in Karlstad, Minnesota. The date fell on Easter, so she marked the occasion with an in-store egg hunt. Nearly 50 children attended the hunt, searching for eggs and hoping to win a prize. “We want family events that give kids good memories about being in a hardware store,” she says, “and giving them something to do gets their parents in the door.”

Lynnea is the senior graphic designer for Hardware Retailing magazine, where she works on the layout and design of the magazine and other custom publications. She also does print design for NRHA’s marketing materials, programs and other in-house projects. Lynnea graduated from Ball State University with a degree in Graphic Design. She lives in her hometown of Greenwood, Indiana. During her free time, she enjoys designing, painting, reading and volunteering at her family-owned childcare facility.
Previous Power Nailer
Next Pinterest: An Online Retail Platform?