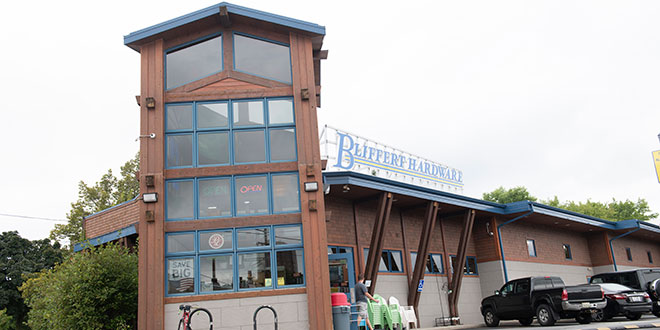 After more than a century in business in southeastern Wisconsin, Bliffert Lumber & Hardware has figured out one of the keys to running a successful lumber operation.

“The most important thing to us is to be the trusted name in the community. Homeowners, businesses and builders know that Bliffert will take care of it,” says company vice president Eli Bliffert. “We have seven lumberyards, and each one is led by a manager who determines how to keep our name in front of people.”

The company was incorporated in 1904 as North Side Lumber and Fuel Co. and took on the Bliffert name after World War I. Over the last 115 years, five generations of the Bliffert family have helped expand it into a total of eight lumber and retail hardware operations.

“I’m the fifth generation, and I’ve been here for 25 years now. We’re pretty hopeful for six generations,” Bliffert says. “We’ve got a good ladder of succession, and we’re set up well to keep going. As most family businesses do, we put more money back into the company than we take out to keep improving and getting better.”

Another component Bliffert says is key to the company’s longevity is its commitment to its staff. A decade ago, the economy presented challenges for the lumber sector, and part of Bliffert Lumber’s hiring strategy was to bring in experienced employees from yards that closed or downsized during that time. Now, Bliffert’s employment challenges are echoed throughout the independent industry.

“There aren’t enough people in the industry,” he says. “Our solution for that is to hire honest, intelligent, hardworking people who have a desire to help others. We’re not just recruiting our staff from the big-box stores or the trades. We’ll teach them the industry. It’s all about looking for someone with spark.”

Taking care of employees is also part of the Bliffert philosophy, and as the company has grown to staff more than 150 people across the lumberyards and the central office, that commitment to care has become recognized throughout the operation and beyond.

“A lot of people invite friends to apply because they like it here,” Bliffert says. “We try to be a long-term, family-friendly company. We have good benefits. It’s hard to maintain, but it’s a real focus.”

‘Always Be Ready’ to Expand

“We’ve done business with friends of the family, and we put everything together in less than two months, all on scratch paper and handshakes,” he says. “We’ve had others that take longer because they involve lawyers and appraisals. It really depends on the seller.”

Most of the company’s expansions have come from folding in existing lumberyards that weren’t performing well.

Some of the smaller yards Bliffert Lumber has purchased started initially as wholesale relationships, with Bliffert supplying them. Bliffert says other lumberyards the company has bought were competitors whose owners he had been friendly with.

“When they were ready to sell, they came to us,” he says. “They knew we would be a good fit to take over operations because they had already been doing business with us.”

Once the sale is complete, Bliffert says the first step is to change over the new location’s computers to streamline the inventory management systems. The next step is to determine which team members want to remain with the operation.

“Sometimes we transfer some of our existing staff to the new location to get everyone up to speed,” Bliffert says. “The goal is to be selling lumber the day we close on the sale.”

When it comes to managing inventory and serving the needs of diverse customer bases across eight locations, Bliffert says having Do it Best serving their operation is key.

“We’ve been with Do it Best for about 12 years, and before that, we weren’t affiliated with any other buying group the previous 90 years we were in business,” he says. “Do it Best is the only co-op that has a great hardware line and also a great lumber and building materials line. They’re the only total solution out there.”

Bliffert says the co-op has been a crucial component of the Bliffert Lumber & Hardware expansion strategy in recent years. Do it Best helped Bliffert with product mix, store layouts, design and advertising, and as a result, the company has seen sales double.

“We’re good lumber people, but we needed a little help on the hardware side,” he says. “I would never be the size I am without Do it Best. It’s nice to have a company that is working for you that’s not a supplier or vendor, but a business partner. That’s the biggest advantage Do it Best has over other suppliers.”

Melanie is the communications and content manager for the North American Hardware and Paint Association. She joined the NHPA team in 2016 as an editor for Hardware Retailing and now helps lead the communications team to deliver relevant, timely content to the industry.
Previous Doorstop Replacement
Next Trio Hardware Grows Its Footprint, Deepens Its Roots