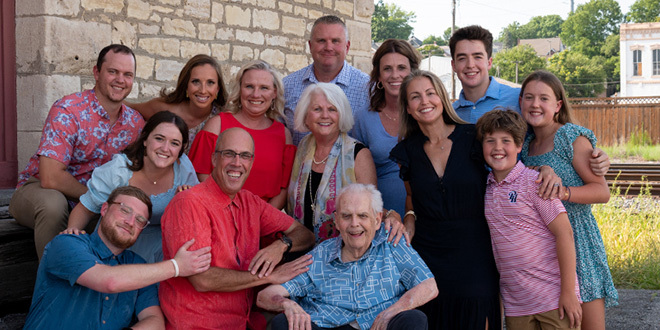 Earlier this month, the community of Atchison, Kansas, came together to recognize the contributions the Blish-Mize Company and the Mize family have made to the area and honor them with the Cray-Seaberg Vision of Excellence Award.

The award ceremony was held on August 6 at the historic Atchison Santa Fe Train Depot, which has undergone a massive renovation project over the last several decades and now serves as one of the main attractions in Atchison.

The Mize family has been instrumental in this rehabilitation, and these efforts were listed among the many contributions they have made to Atchison throughout the years. In addition to their work helping restore the Depot, speakers during the ceremony also highlighted the impact Blish-Mize and the Mize family have had in other areas of the community, including the hundreds of jobs they provide to area residents.

According to the award committee, they were honoring the Mize family for their “visionary leadership and outstanding support they have provided the Atchison community for over a century and a half.” Along with the Cray-Seaberg award, the city also officially declared an honorary day for both the Mize family and the Blish-Mize company.

Jonathan Mize, Blish-Mize president and CEO, was on hand to accept the award and thank those in attendance. “I can’t say how much this means to our family,” he told the crowd.

A number of representatives from the home improvement community also made the trip to Atchison to take part in the ceremonies.

“The Mize family and Blish-Mize have been ardent supporters of our organization for years,” says Bob Cutter, NHPA president and CEO. “They are a great example of how a family and a company can have an impact on their local community and the entire home improvement community with their support and efforts.”

The Cray-Seaberg Vision of Excellence Award was established in 2014 and honors individuals and families who demonstrate extraordinary leadership and promote betterment for the community.

Carly joined the NHPA staff in 2021 as an associate editor. Born and raised in Indiana, Carly earned a B.A. in English from Indiana University Bloomington. She enjoys reading, hiking, and cheering on the Indiana Hoosiers.
Previous Office for Bombing Prevention Offers Resources to Retailers
Next NHPA to Host Technology Conference in 2023