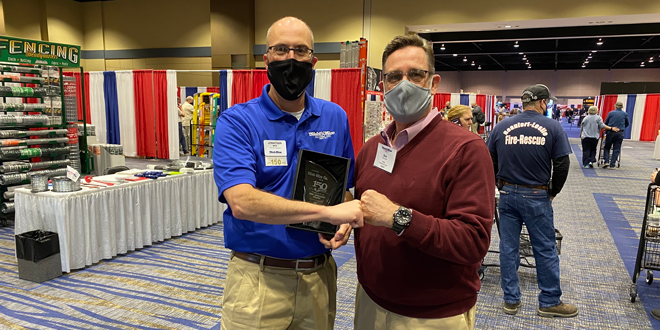 After more than a year of most events in the home improvement industry grinding to a halt, Kansas-based Blish-Mize Co. held a live, face-to-face market last week, welcoming retailers and vendors to the Overland Park Convention Center for its three-day Spring Buying Market running March 18-20.

Safety protocols were front and center during the event. While masks, social distancing and hand sanitizer stations were the rule, the market itself was energetic and upbeat, which was a good reflection of industry business trends, according to Jonathan Mize, Blish-Mize CEO and president.

“We wanted to hold an event that would allow our customers to do all the things they normally do at one of our buying shows. But, coming into this event, our primary concern was, of course, the health and safety of our customers, our vendors and our employees,” Mize says. “We have a great relationship with the convention center team and we worked closely to develop a plan that we all felt would address these concerns. This includes wider aisles, spreading everyone out more throughout the facility, installing hand sanitizer stations and serving boxed lunches, among other precautions.”

The result of the advanced preparation and safety precautions was a show that was well attended and included more than 350 retailers and hundreds of vendors.

“We are very pleased with the turnout we got and the support we’ve received from the vendor community,” Mize says. “Leading up to this event, our customer and vendors said they enjoyed participating in the online show but really missed all the qualities a live show brings, so everyone was really excited to get back to an in-person experience.”

While the Blish-Mize market marks a bit of a milestone as one of the first live events since the COVID-19 pandemic began, the event also marked a more substantial milestone for the company—its 150th anniversary.

“When you look at the fact that our company is celebrating 150 years since it was founded, it kind of puts things in perspective and you recognize that, while we are going through some challenges in our industry right now, our company has been through a lot of things in the past and still made it to this point,” Mize says.

To recognize the anniversary, Bob Cutter, president and CEO of the North American Hardware and Paint Association (NHPA) attended the market and presented the company with an award honoring the achievement.

“Our entire industry is so rich with history, that it is truly worth noting when a venerable company like Blish-Mize reaches such a significant milestone,” Cutter says. “NHPA has been around for just over 120 years, and it is quite an honor to be able to recognize a company that has been serving this industry for even longer.”

As Blish-Mize marks its 150th year, Mize also noted that the company is coming off one of its strongest sales years in recent memory. According to Mize, the company saw sales in 2020 increase by 10 percent and sales in the first quarter of 2021 tracking at about 16 percent above last year.

At the Spring Market, the company also announced it is planning for its fall event to take place Aug. 26-28 at the Overland Park Convention Center.

Melanie is the communications and content manager for the North American Hardware and Paint Association. She joined the NHPA team in 2016 as an editor for Hardware Retailing and now helps lead the communications team to deliver relevant, timely content to the industry.
Previous Home Hardware Virtual Spring Market Begins March 22
Next 150 Years of Blish-Mize: A Q&A With John and Jonathan Mize