Home » Industry News » A Conversation With Bob Taylor, Do it Best Corp. President and CEO 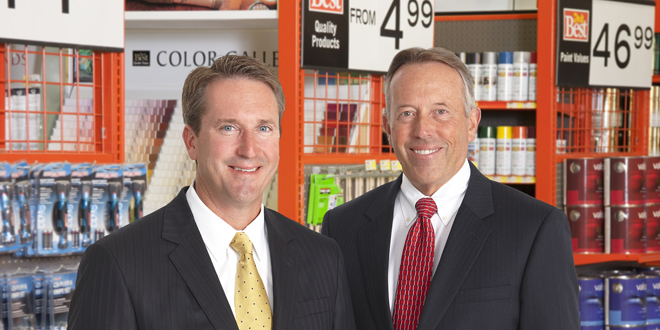 A Conversation With Bob Taylor, Do it Best Corp. President and CEO

View a PDF of the original article as it appeared in the October issue of Hardware Retailing. Read below for additional questions and answers.

Hardware Retailing and the North American Retail Hardware Association (NRHA) recently had an exclusive interview with Bob Taylor, the outgoing president and CEO of Do it Best Corp.

In this Q&A, Taylor answers questions about his perspective on the industry, his successor, Dan Starr, and much more. The following answers from Taylor are bonus responses that weren’t published in the magazine.

BT: As the CEO, it would really be underscoring the benefit of the co-op structure – I think it offers something no regular distributor can. The way I describe that is kind of like a three-legged stool of customer, vendor and owner. Obviously, whether you’re a distributor or a co-op, you have customers, and you hope that everybody delivers that really high level of customer service and connection. I think it’s obviously very important. But for a co-op, it doesn’t stop there, because there are also members and that membership has its privileges. We’re selling directly to them, not to their competitor, and it’s a commitment to them and to their success as an owner. They share the profits of the company. The rebate dollars are distributed to them to fuel their growth, not corporate growth. It’s a very foundational element.

The hardware industry has every bit as much of competition as any other out there but the independent hardware dealers have been able to not only survive but thrive from the strength of the co-op relationship.

The other thing is, you don’t get the full benefit unless you fully commit, jumping in with both feet and taking advantage of everything that your co-op offers. And that’s why, at least from the Do it Best perspective, it’s been important for us to offer our programs and services in a menu-driven format. We don’t mandate it, but it’s certainly to their benefit if it’s a fit for their business and they really ought to take advantage of that. It’s not just a commitment from the co-op to the member but also the member back to the co-op.

From the retail perspective, it’s the retailers sharing. Today’s retail landscape is more challenging than it’s ever been, and that’s especially true for independents. And I don’t think it’s getting any easier. When you look at the competition, technology, regulations, access and capital, all of those things are challenging situations and the changes are coming even faster.

So the message to the CEO and the co-op would be, “Keep looking around the corner for us and make sure we have the products and services we’ll need so we spend less time worrying about the back door and more time focusing on the front door and our customers.”

HR: How do you think the independent home improvement retailing industry has evolved since you first entered it?

BT: The best way to summarize that is there has just been tremendous shakeout and consolidation and that’s at all levels, that’s not just retail—it’s retail, manufacturing and distribution. If you look back over the time that I’ve been in this industry, it’s been a dramatic change.

If you went back and looked at your magazine from 15 to 30 years ago, and the stories that were being talked about then and the folks who were key players then, you’d have never heard of many of the people and companies existing today. The landscape has changed so much and the appreciation through all of that is the change. It’s certainly illustrated when you look over that history that it’s not always the smartest or the strongest or the biggest that survive, it’s those who are able to adapt to change.

HR: What concerns you the most about the future for independent home improvement retailers? How do you mitigate these concerns?

BT: When you work with thousands of family-owned businesses, succession planning is always of the highest importance. The challenge is, those are family discussions and they’re different from one family to the next, so there is not one answer. It’s important for us to first ensure that our members have a strong, profitable business that provides an attractive opportunity to the next generation. But then we need to continue to bring visibility to the subject of succession planning and keep providing resources for the next generation of leaders.

It really benefited me in coming along with my family business that my father was very willing to hand over responsibilities, even if it meant we might screw something up, but he didn’t hold on too tightly. I see that tendency happening too often and it turns the next generation off.

My dad is nothing if not fanatical about planning, and obviously it rubbed off on me. I absolutely appreciate the importance of that and putting in that time necessary to do a good job planning for the future.

I’m happy with our own efforts, for example, in developing roundtable groups among the millennial generation and allowing them the opportunity to learn from one another. We’re also in our third year of our Do it Best Leadership Development Institute and that’s been particularly well received by our members. And then on the NRHA Retail Management Certification Program, we’ve had more than a dozen Do it Best graduates and that’s one of the reasons we’ve started offering sponsored scholarships because I really love what I see coming out of that effort, too.

HR: Who would you list as some of your mentors in this industry and what do you feel you learned the most from them?

BT: I was thinking back to the first time I ever went to a True Value market and met John Cotter for the first time. And as a young man, it was kind of intimidating. Here was a guy who was a pioneer in our industry and I’d never dream decades later I’d have the chance to exchange monthly phone calls with a guy named Ed, who was his right-hand man at the time. The history and the understanding he had of the independent business was just so impressive.

Don Wolf, certainly. I don’t think I’ve ever met anyone with his kind of energy, enthusiasm and passion for the independent business and he still has that today. He’s just that way. It’s always been a passion of his and helping members establish a culture here in this company that I just feel has beem a privilege in continuing to add strength to.

I first met Mike McClelland in the 1980s at a roundtable at the NRHA headquarters in Indianapolis. They pulled together retailers, manufacturers and distributors for this roundtable discussion. Mike and I just happened to sit next to each other and struck up a friendship.

It would be hard for me to name retailers I’ve learned from because there’d be too many I’d leave out. There are so many who have shared information back and forth and that openness and willingness to do that–hopefully it’s been as helpful for them as it has for me.

At the top of my list, though, would be my father. When you grow up in a family business with someone so willing to share responsibilities and help you learn and develop, it’s just a great opportunity. And then to work alongside your family members, it’s pretty special. It wasn’t just learning from a business entrepreneur but also a civic entrepreneur. He was always exploring new opportunities. He was a great promoter. He was never scared of the competition and realistically approached it. He wasn’t afraid to embrace change and he still is a servant leader who is focused on giving back to the community.

BT: For the younger generation coming in, I have four things to share: 1. Learning is a journey. It’s not a destination. Always keep learning, growing and getting involved in your community. 2. Do your best, never anything less. Ask yourself, “Would I sign my name to it?” 3. The importance of humility. There’s no leadership without it and there’s no real leadership without servant leadership. 4. Serve others as you would like to be served. Remember that everyone else has a story and you need to take the time to understand it.

Renee Changnon is the retail outreach coordinator for NRHA. She meets with retailers in their stores and at industry events and introduces them to the services NRHA provides. Renee previously worked as a member of the NRHA communications team. She earned a degree in visual journalism from Illinois State University, where she served as the features editor for the school newspaper. After college, she implemented marketing and promotions initiatives at Jimmy John’s franchise locations across the country. She enjoys exploring books with her book club, Netflix marathons and hosting goat yoga at her apartment complex. Renee Changnon 317-275-9442 rchangnon@nrha.org
Previous Home Depot Argues for Bank Responsibility in Breach Case
Next Playing Around at the Hardware Store Game Night