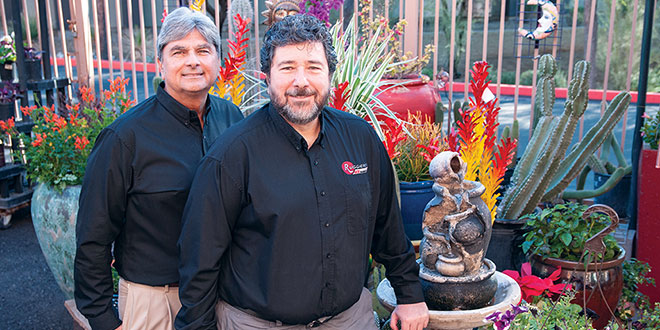 From Famine to Flourish

Brothers Martin and Art Ruggiero—owners of Desert Foothills Ace Hardware in Phoenix—were already business partners before most kids their age had moved on from their high school and college jobs.

Their father, Al, had opened a hardware store in 1976 as a retirement plan. He realized within a year or so that the business wouldn’t become profitable quickly. He wanted to close the store, but couldn’t afford to break his lease on the retail space.

Martin, at age 20, and Art, who was just 15, made a choice. They decided to keep the store alive so their dad wouldn’t have to pay the penalty if he broke the lease.

Martin was in college and Art was still in high school, but they began spending their free time scrambling to manage a struggling operation they didn’t know how to run.

Their mother helped out at the business, and eventually they could afford to hire other employees.

The brothers learned as they went, talking to customers about what they needed and expected from a local hardware store.

“We knew every customer by their first name,” Martin says. “We really enjoyed the business and being on the floor with our customers.”

Four decades later, Martin and Art are still partners. They have a third generation of Ruggieros rising in the company that is eager to keep it family owned.

And their business is now a flourishing multistore operation called the Jant Group Inc. with seven locations in Arizona, New Mexico and Washington state. Each store has a local name specific to its community, such as Desert Foothills Ace Hardware, which is located in the Ahwatukee neighborhood near the foot of South Mountain in Phoenix.

“It’s kind of our niche to take a struggling store and make it profitable. We’ve found a very successful way of doing it.”
—Martin Ruggiero, Desert Foothills Ace Hardware

Since making their father’s store successful, they have grown their operation primarily by acquiring stores that weren’t doing well.

“It’s kind of our niche to take a struggling store and make it profitable,” Martin says. “We’ve found a very successful way of doing it.”

During the past 20 years, the brothers have bought or started four stores in Arizona; one in Santa Fe, New Mexico; and two in Spokane, Washington. They are currently on the lookout for more acquisition opportunities.

Neither Martin nor Art spends much time working on salesfloors anymore, particularly since Martin’s job now includes visiting every store location at least once a month. Martin also oversees the company’s financials and commercial sales, while Art handles human resources and operations.

They have built a management team they trust to oversee day-to-day operations at the stores and the next generation of Ruggieros are enthusiastic about keeping the family business thriving. Art’s sons Austin, age 32, and Josh, 35, are already involved in the company, and Martin’s son Troy, 25, has expressed eager interest.

“We have very capable children to take over the company,” Martin says. “They understand the business and understand our philosophy. We’re very fortunate.”

A Partner in Growth
Martin and Art credit Ace Hardware Corp. with helping their operation thrive and grow. They have worked with the co-op since their first store started in the 1970s.

Ace has been an important partner for four decades, helping the brothers expand the business through acquisitions. Over the years, the co-op has helped the brothers identify store owners who want to retire or are otherwise looking to get out of their business.

In addition, the co-op has assisted with resetting product departments, provided advertising programs and a robust customer rewards program, conducted market studies and offered suggestions for the product mix for each new or acquired store.

The Ruggieros’ most recent purchase was in 2017, when they bought their 12,500-square-foot location in Peoria, Arizona.

Their current goal is to buy two or three more stores within the next few years. Ace Hardware continues to help Martin and Art look for and negotiate with other Ace store owners who are ready to sell.

An ongoing struggle for independent retailers who do not have family members or managers lined up as successors is finding buyers so they don’t have to close their stores when they retire. “I think we can help,” Martin says.

The Jant Group now has a reputation for buying stores and making them successful thanks to a track record of making acquisitions profitable within about a year, he says.

Martin appreciates Ace Hardware’s ongoing support of the company’s growth. The co-op takes a personalized approach to serving the business, he says.

For example, Ace CEO and president John Venhuizen called Martin on Black Friday in 2018 to check how the stores were doing.

In turn, Martin feels comfortable calling Ace executives if he encounters problems in the business and has seen quick resolutions in response to concerns he has expressed.

“I can’t imagine not being an Ace dealer, to be honest,” he says.

Kate is profiles editor for Hardware Retailing magazine. She reports on news and industry events and writes about retailers' unique contributions to the independent home improvement sector. She graduated from Cedarville University in her home state of Ohio, where she earned a bachelor's degree in English and minored in creative writing. She loves being an aunt, teaching writing to kids, running, reading, farm living and, as Walt Whitman says, traveling the open road, “healthy, free, the world before me.”
Previous 3 Ways Your Business Can Support Youth Farming Clubs
Next Robot Team Introduces Latest Creation to Hardware Store Crowd