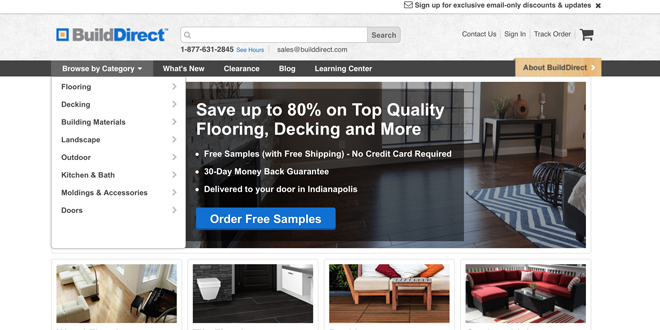 An online home improvement retailer has gotten millions of dollars in investments this year.

Investors have committed $50 million in funding for the retailer, BuildDirect of Vancouver, to improve its product assortment and online platform, according to Forbes.

The online retailer sells hardwood flooring, patio furniture and marble tile at low prices, “as much as 80 percent off typical retail prices,” due to their strategy of buying inventory directly from manufacturers, according to the Forbes article. Jeff Booth and Rob Banks founded BuildDirect in 1999.

The Forbes article discusses the experience of a DirectBuild customer, stating, “Jenny Clark, a 36-year-old newlywed from Easley, S.C., found the website Google ads and ordered free hardwood floor samples. After three months of deliberation she ordered 3,700 pounds of flooring, which arrived in four days and cost half that of a similar product from Lowe’s.”

Besides buying directly from manufacturers, BuildDirect created its own “software to calculate the most efficient shipping rates and routes for overweight freight,” the article says. Forbes estimates the company to be worth more than $350 million, as it will generate $150 million in revenue this year alone, doubling what it earned in 2013.

“BuildDirect hasn’t yet turned a profit, according to sources close to the company, due to high spending on search ads and sample shipments, which cost as much as $10 per package,” the article says.