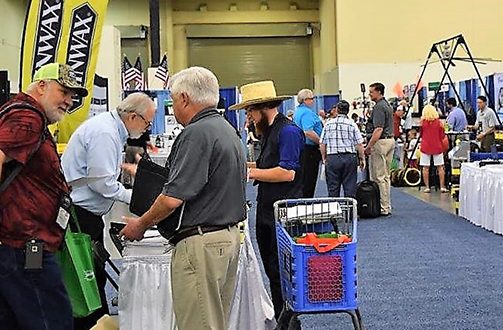 “We’ve taken a hard look at the numbers since the market, and sales were up 15 percent just in our Bonus Buy specials in individual items and assortments,” Hasson says. “There are two reasons: new dealers are joining longtime dealers in recognizing the profitability advantage flowing from these deals, and more vendors are seeing opportunity and asking to be part of the promotion.

“We’re also looking at an economy that continues to be strong,” says Hasson, who heads the 113-year-old family-owned company, which is America’s largest independent regional hardware distributor. House-Hasson serves retailers in 23 states and the Caribbean Basin.

“Various news reports say the economy is slowing down, but there’s no evidence of that at our markets,” Hasson says (House-Hasson holds three markets annually). “The economy hasn’t slowed down that we can observe, based on the buying patterns of our dealers, the growth of vendors at our markets, and the results each are achieving.”

Lumber costs are down, adding to retailer activity, Hasson says.

“Lumber is down about 30 percent in cost, so volume is increasing with sales up about 20 percent,” he says. “That’s a boon to homebuilders, construction contractors and the whole economy.”

The October market, as is customary, was held at the Wilderness of the Smokies Resort in Sevierville, Tennessee, just outside the Great Smoky Mountains National Park.

“Our dealer and sales base expansion into Louisiana, Texas and Arkansas is having a great effect. We added sales staff that had previously worked with HDW, a now-closed Greenwood, Mississippi, hardware distributor. They have knowledge of these new areas for us and credibility with dealers. It’s benefiting everyone,” McCutcheon says. “Our January market in Nashville historically has been our largest event, and when vendors would roll out new products they really wanted to push. However, with the growing popularity of our other markets, many vendors aren’t waiting until January to display their new items.”

In addition to Bonus Buys, other market promotions include pallet buys and booth, drop-ship, coupon and LBM specials.

“Dealers are increasingly recognizing that these buying programs build their margins,” Monroe says. “As more dealers take advantage of these specials, more vendors want to participate so they can gain from the buying activity. It’s demand leading to supply. If dealers buy strategically, they can be profiting year-round from buying specials.”

House-Hasson’s next market is scheduled for Jan. 30-Feb. 1, in Nashville. Click here for more information and to register online.

Melanie is the communications and content manager for the North American Hardware and Paint Association. She joined the NHPA team in 2016 as an editor for Hardware Retailing and now helps lead the communications team to deliver relevant, timely content to the industry.
Previous Industrial Pipe Wall Shelf
Next Door Guard and Lock