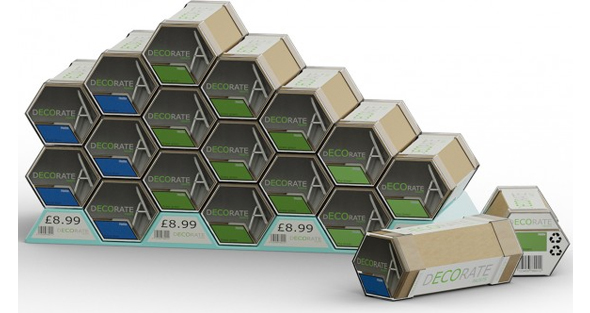 Could Paint Cans Get a Makeover? Inventor Says ‘Yes’

The basic design of a can of paint hasn’t changed much since its invention in 1868. But Alec Machin, a designer from the U.K. may change that.

A large part of his design centers around creating smaller containers, with goal that people will buy only the amount of pain that need for a particular project and not waste the other paint.

But what if extra paint is left over? Machin thought of that too. Because Machin’s design squeezes out paint through a one-way valve, the paint doesn’t dry out and lasts longer. A special coating, using the same material in emergency blankets, protects the paint from heat and cold in a garage.

The hexagonal shape of the package makes it more efficient to pack on a truck than the usual can, so it can save energy in transportation. The package could also be shipped flat and assembled in a store when the paint is mixed. Eventually, Machin says, the containers could even be used to mix paint themselves–so stores could prepare and stock a smaller collection of colors.

For paint manufacturers selling in states such as California, which now requires companies to set up programs to take back unused paint and safely dispose of it, the design could help save money as it protects the environment. The package itself is also easier to recycle than a metal paint can.

For now, it’s just a concept. Machin, a student at the University of Nottingham, designed the package for the RSA Student Design Awards, but he’s planning to meet with paint manufacturers next and hopes to bring the idea to life.

Jaime Koch was the managing editor of Hardware Retailing Magazine. Jaime regularly traveled around the country and internationally to visit with retailers and share their stories. Jaime was honored by the American Society of Business Publishers for Editorial Excellence.
Previous Markets Improve; Mergers Heat Up
Next TSC Comp-Stores Down 5 Percent Year-Over-Year Q2