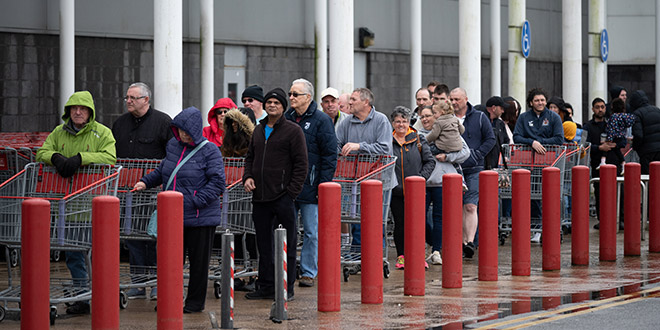 On March 11, the World Health Organization declared COVID-19 a pandemic, the first in more than a decade. As the number of confirmed cases surpassed 3,100 people in 49 states, governments, communities and businesses of all sizes have been forced to reevaluate standard procedures.

Stay Safe: The Centers for Disease Control and Prevention (CDC) has released a checklist for businesses to ensure they’re prioritizing health and safety. Review the steps you can take now.

Home Depot says that along with more frequent store cleanings, it is also canceling upcoming internal and external events, including its in-store workshops.

The company states it has “relaxed [its] time-off policies, so associates don’t exhaust sick, personal or vacation time if they’re directly or indirectly impacted by COVID-19.”

Additionally, purchases of masks in Home Depot locations will be limited to 10 units per customer.

“We’re grateful to our 400,000 associates and thousands of suppliers who are working diligently to provide our customers with essential products and a great shopping experience,” the company says in a statement. “We are staying in close contact with the CDC as this situation evolves and will continue to make sure that our business practices and other measures for the safety of our customers and associates are consistent with the most up-to-date information.”

Marvin Ellison, president and CEO of Lowe’s, wrote a letter to customers outlining his company’s response to COVID-19.

“We’ve spent the last several weeks preparing for how the virus may impact the communities we serve. We’ve established a task force that is working closely with the CDC, health authorities and all stores across the country to ensure we’re taking all necessary preventative measures,” Ellison says.

The company has implemented new time-off guidelines to encourage employees who feel sick to stay at home. It will also clean its stores more frequently to reduce potential exposure.

Lowe’s is also restricting the amount of masks and certain cleaning supplies that can be purchased as its stores, though Ellison did not provide a specific quantity in his letter.

COVID-19’s Impact on Other Retail Segments

Across the U.S., clothing stores, grocery stores and shopping centers reduced their hours of operation in an attempt to limit potential exposure for customers and employees.

Apple announced it would close all retail stores outside China until March 27. Nike issued a similar statement, temporarily closing its U.S. retail locations until March 27.

Walmart, the world’s biggest retailer, announced it would cut hours at its 24-hour locations beginning March 15. Stores that were previously open 24/7 will now open doors from 6 a.m. to 11 p.m. until further notice.

Walmart also launched an emergency leave policy for its U.S. workers, enabling them to receive up to two weeks pay if they are subject to quarantine.

Several home improvement industry events have postponed or canceled in the wake of COVID-19.

The National Hardware Show and the North American Retail Hardware Association All-Industry Conference have been postponed. Originally scheduled for May 5-7, event organizers plan to host the event later this year.

Blish-Mize Co. has transitioned its buying market to a virtual event to be held March 19-21.

On March 6, Ace Hardware Corp. announced the cancellation of its 2020 Spring Convention, which was to be held in Chicago March 12-14.

In addition, the House of Representatives passed an economic relief bill which will allocate “tens of billions of dollars for paid sick leave, unemployment insurance, free testing and other measures.”

How is your business handling concerns about COVID-19 from customers and employees? Reach out via Facebook or visit the NRHA Retailer Forum to share your stories with peers.

Todd is trends editor for Hardware Retailing magazine. He graduated from Indiana University where he majored in journalism and French. Throughout his career, he has aimed to highlight small businesses and their community value. He joined NRHA in 2017.
Previous Still Trending: Backyard Chickens
Next Step into the Wild