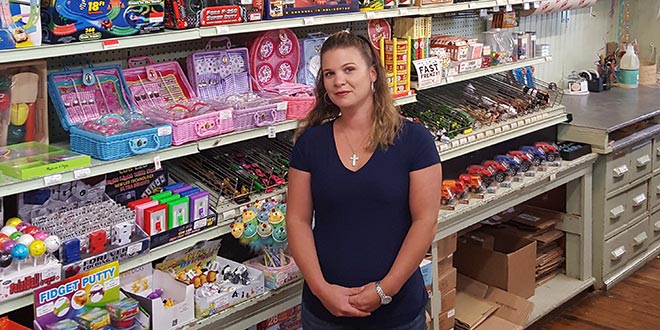 “We’re a true general store, and we’ve been in town for 130 years,” says owner Rodney Spies. “We have customers who come in every day who grew up here and who shopped with the original owner 65 or 70 years ago. Those people are still shopping with us today.”

Along with its reputation for being a general store, the business has built up categories to address the needs of every Goldthwaite resident, including the youngest ones.

“We started carrying toys about 10 years ago,” says owner Ginger Spies. “I walked by a Melissa & Doug display at our wholesaler market, and I thought, ‘We could do this. It fits our niche.’”

Ginger made an opening order of $500 and the vendor helped them determine the first mix of toys to sell in the store. Since the category has grown, they have continued working with the company to help choose the best toys to stock. They also have the help of department manager Amber Green who selects new products and monitors sales in the category. 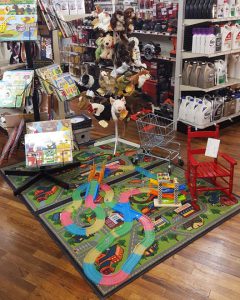 “We’re in a low-tech environment here, very few things have a battery,” Ginger says. “It appeals to grandparents who think their grandchildren have enough computer games. We also bring in games that adults enjoy and families can play together, like dominoes.”

Ginger says the toy department brings in a lot of people buying gifts for children. The closest store in town is a dollar store, and many people don’t want to buy gifts there when they have higher quality options at Mills County General Store.

“We don’t carry things that typically are in a big-box store. We reach out for things that are carried in specialty toy stores,” she says. “You can find some Melissa & Doug in Walmart or Target, but they don’t have the assortment. That’s another thing that helps drive our traffic. Our customers know they’re going to find something different.”

Several years ago, the Spies switched wholesalers, and during the transition process, the store went through a reset. Ginger says they were adamant about creating a space for children to enjoy the toy department.

“We carved out a little space, put down a play carpet and put toys out,” she says. “We found some cute picnic tables for children.”

The play area is central to the store, and it’s visible from the housewares department. While parents are shopping housewares, they can still see their children in the play area.

“The area is most successful when we rotate toys,” Ginger says. “We recently moved the picnic table outside and set up a toy racetrack out there. There’s no doubt that the more you show things, the more they sell.”

Planning for the Future

Another unique way the Spies support local youth and bring them into the store is something they continued from the previous owners: a graduating high school senior gift registry.

“I don’t know how long seniors have been registering for gifts,” Ginger says. “We only have about 50 kids graduate each year, but everybody knows everybody, so everybody buys something. May and June are two of our busiest months because of that program.”

The business also supports students at local schools. A neighboring high school created wildflower art and Ginger purchased three designs that she then had put on dishtowels, coasters and glasses to sell in the store. Last Christmas, the local elementary students submitted art for Christmas towels and Christmas cards, which went through the same process.

The toy department currently represents about 3 percent of the store’s total volume, and Rodney says they maintain a significant margin on the category. But having the department isn’t just about growing sales. It’s about instilling positive associations with the business for the next generation.

“They’re our future customers, so we wait on them hand and foot,” Rodney says. “And it’s not just about toys. We sell items that kids need for local hobbies, too, like BB guns, fishing poles and tackle boxes. Getting them started with those items helps create that connection, too.”

Watch the YouTube video here for a tour of Mills County General Store and Ace Hardware.

Melanie is the communications and content manager for the North American Hardware and Paint Association. She joined the NHPA team in 2016 as an editor for Hardware Retailing and now helps lead the communications team to deliver relevant, timely content to the industry.
Previous Ace Hardware Names Kim Lefko as Chief Marketing Officer
Next Home Depot Adds Home Decor Inventory

The Independent Retailer Index, developed by the North American Hardware and Paint Association (NHPA) in …