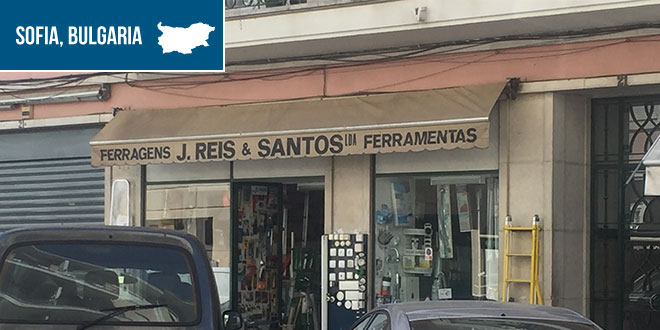 Language and cultural differences. You learn quickly that these are the two most important things to adapt to when traveling to a different country.

Prior to embarking on Remote Year, I had a grand plan to do a self-guided tour and iPhone photoshoot of home improvement stores in each country that I visit. Turns out, that’s not as easy as it sounds.

The way things work in other countries is just, well, different. However, there was one aspect of the independent retailing channel that I’ve learned spans across borders – superior customer service.

After an hour of Google searching for independent hardware stores in Lisbon, Portugal, I put on my walking shoes to visit two stores within a 30-minute walk of my apartment.

When I arrived at store number one, I was quickly disappointed when I realized that it wasn’t open, despite the hours listed online. Lesson one – you can’t always trust the internet when it comes to information on small Portuguese businesses.

So I walked another 20 minutes to check out this store:

In Portugal many people spoke English, so, I confidently walked into this small store and asked the elderly gentleman at the counter if he was the owner. With a questionable look on his face, he began to speak in Portuguese and motioned for his wife, who also worked in the store, to come over.

I realized quickly that they didn’t speak any English, and I no Portuguese. So I did my best to use hand motions and make-shift sign language to ask if I could look around and take a few photos.

This “conversation” ended in the store owner going back and forth to the back room attempting to find the product or products he thought I was asking for. After several attempts of him bringing me a product and me trying to explain that I just wanted to take a few pictures, the visit ended in the owners drawing me a map to the nearest camera store.

As I exited the store, I felt discouraged for my lack of success in getting photos to share with retailers back home. But, even more so, I also felt overwhelmingly touched. It would have been easy for these store owners to shoe me, a foreign young woman, away from their store. Instead, they took nearly 30 minutes out of their busy day and so diligently tried to help me find what I was looking for, despite the language barrier. They refused to let me leave their store without providing me with the answer they thought I was looking for.

I take pride in my work for the North American Retail Hardware Association (NRHA) because I believe so greatly in the power of the independent industry and what a strong role independent business owners play in the lives of their customers and communities. And it was amazing to see the personality of the local businesses I know and love back home, echoed across the world.

In Rabat, Morocco, most of the locals did their shopping at the “Medina of Rabat,” which we referred to as “the Medina” for short.

The Medina is an older, walled-in, part of the city that can only be entered through specific streets where some Moroccans live and many go to shop. Inside its walls is a maze of stone streets lined with traditional shops, smaller than an average American’s bedroom. These shops sell souvenirs like lamps, carpets, leather bags and footwear. Here you’ll also find shops with spices, produce and fresh meat. And if you look hard enough, you’ll also find hardware stores.

While aimlessly wandering through the Medina on a Saturday afternoon, a few friends and I found ourselves on a Medina street lined with hardware stores. In Morocco, locals are sensitive to photography, so I respectfully kept my camera in my purse and peaked into the stores as we passed by.

Instead of putting several categories under one roof, each store in this particular alley of the Medina housed a different category. One guy sold tools, his neighbor sold paint, the next store had hardware, and so on. Considering the limited square-footage of each store, it made sense, and it sparked my curiosity. Is each store owner an expert in the category he sells? Do they all work together? Is it by chance that they’re all set up next to one another? Knowing absolutely no Arabic or French, I couldn’t ask the business owners on the spot. So, a few days later, I asked a local friend.

She explained that, like in the United States, there are big-box hardware stores outside of the busy city that are comparable to Lowe’s or Home Depot. When I asked her about the block of specialized shops inside the Medina, she raved about it being her favorite place to shop for home improvement needs. Why? Although the stores are divided by category, she could get everything she needs in that one stretch of the Medina. The business owners can always answer her questions and sell her the exact products she needs. And if they don’t have what she’s looking for, they’ll find it or point her in the right direction. She explained the importance of shopping at these small stores to support her community.

Again, I was so happy to see the same small business and shop local culture that we have in the United States is also present in Rabat, Morocco, a country and city that is far different culturally than what we’re used to in America.

Today I’m in Sofia, Bulgaria, which is my third stop on Remote Year. Each country I’ve been to has its own unique retail environment, and I look forward to sharing more about Bulgaria in the coming weeks!

Where in the world is Hilary?

North American Retail Hardware Association (NRHA) staffer Hilary Welter is spending 12 months traveling with Remote Year, living, working and getting in touch with retail in different parts of the world. She’s currently working from Sofia, Bulgaria. To see more NRHA Abroad posts from Welter, click here. For a look at what it’s like to travel, work and live abroad, check out her personal blog.