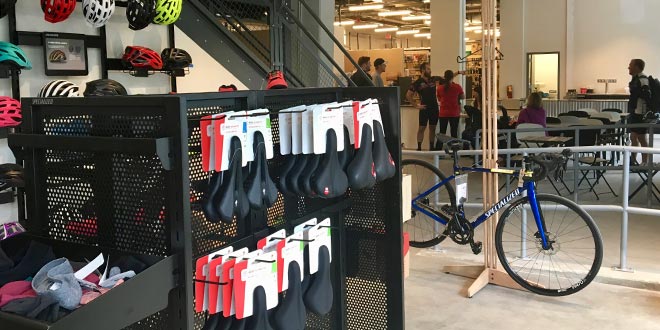 In Washington, D.C., one of people’s favorite modes of transportation is biking. When this excitement for biking really kicked into gear in the 1970s, District Hardware and Bike decided to hop on the craze, becoming a hardware and bike shop. The business has remained a staple in the community ever since. However, third-generation owner Jarrett Conway and his father decided they needed to find a way to grow, and moving into a new location was the best way to do that.

“About three years ago, we recognized the neighborhood we were in was a nice neighborhood, but it wasn’t adding density,” Conway says. “Local developers were raising rent, but it wasn’t sustainable. My father and I began looking at locations and there was a new space being developed in an area called The Wharf. It is a mile-long development along the water in D.C.”

A New Location, A Unique Addition

The family looked at several locations, but a move to The Wharf allowed them to add 3,500 square feet of salesfloor and presented them an opportunity to increase their presence in the community. One way to make their unique hardware and bicycle business stand out even more was by adding a café to the mix, Conway says.

He had seen big-box retailers and grocery stores with coffee shops and thought it was a smart business model to follow.

“I thought it would be cool to have our own café, and I saw it as a simple way to encourage shopping throughout the rest of the store,” Conway says. “In the businesses that feature a coffee shop, customers take their time walking through with a coffee in hand as they shop.”

Plus, adding a café to the business made sense in another way to Conway.

“Before, we’d be mixing paint for a customer or working on their bike, and we’d direct them to a coffee shop down the road if they wanted to wait,” he says. “We realized we needed to capture that audience, not just from a revenue standpoint, but to help build a community. In our new location, we host classes and have a meet-up point in the café where people can discuss home improvement, biking or any other passions they may have.”

To make their business a must-visit spot, Conway says they offer Wi-Fi, a full-service café with pastries, a takeaway window so people with pets can walk up for a cup of coffee. Later in the day, they sell beer and wine, and they plan on serving cocktails as well in the future.

“Our café is about 800 square feet,” he says. “We’ve found we have a good mix of customers stopping in the café and vice versa. Since we have opened, I have not seen an empty seat in the house. I’m very happy with the immediate foot traffic we’ve seen.”

While Conway says their business model wouldn’t work for everyone, it makes sense in Washington, and he encourages others to look at what makes sense in their communities and not be afraid to try something a little different.

“I think the big challenge now is that people want an experience and they want something unique,” he says. “Having a complimentary coffee area in your store encourages people to stay around a little longer. Don’t be afraid to try something unique, because even if it seems little off, it sticks in people’s minds. Someone might think, ‘What is this?’ But it’s memorable and gets them out of the general malaise.”

Renee Changnon is the retail outreach coordinator for NRHA. She meets with retailers in their stores and at industry events and introduces them to the services NRHA provides. Renee previously worked as a member of the NRHA communications team. She earned a degree in visual journalism from Illinois State University, where she served as the features editor for the school newspaper. After college, she implemented marketing and promotions initiatives at Jimmy John’s franchise locations across the country. She enjoys exploring books with her book club, Netflix marathons and hosting goat yoga at her apartment complex. Renee Changnon 317-275-9442 rchangnon@nrha.org
Previous Expert Advice: Practical Steps to Prep for Hurricanes and Floods
Next Something To Be Thankful For