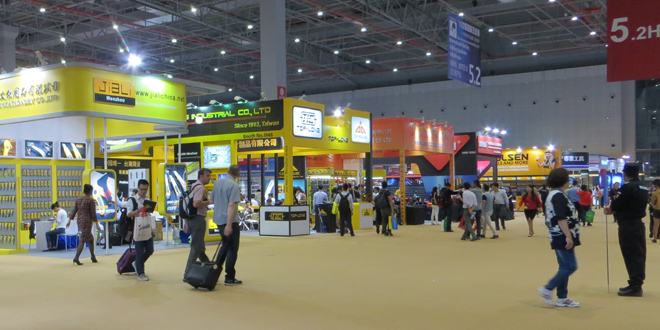 Dancing Robots One of Many Highlights at China Show

The show, which runs Oct. 21-23, covers more than 1.6 million square feet at Shanghai’s National Exhibition & Convention Center. The event marks the first time at this new and larger venue, a 30-percent increase in size from the 2014 show.

CIHS 2015 is unique because it is co-located with the China International Kitchen and Bath Expo 2015 (CIKB), the China Lock & Security Show and the China Fastener Show, providing attendees a well-rounded vendor selection.

For the opening ceremony of the three-day event, Shi Senglan, president of the China National Hardware Association, shared some welcoming words (in Mandarin) alongside other representatives from host organizations, such as the China National Hardware Association, Koelnmesse GmbH, All-China Federation of Industry and Commerce, Hardware and Electromechanical Chamber (CHEC), Light Industry Sub-Council and China Council for the promotion of International Trade. These organizations’ combined efforts are why the show is a consistent success.

“CIHS is celebrating its 15th birthday this year and has successfully developed into the world’s second biggest event,” says Michael Dreyer, Koelnmesse’s vice president, Asia Pacific. “As you have seen this year, CIHS has once again expanded its scale and exceeded the quality.”

A walk of the showfloor provided a look at a wide range of home improvement products. Exhibitors displayed products ranging from gardening gloves and tools to high-tech kitchen appliances. Some vendors even showcased industrial robots and the different uses for these advanced tools.

DonSon, a manufacturer of these robots, orchestrated an industrial robot show. The show had four different industrial robots synchronizing their movements to accompanying music. This entertaining demonstration attracted attention and was a highlight of the day. Watch a video clip for a glimpse of the show.

Visitors of CIHS 2015 come from all parts of the world, filling the halls with more than 15,000 attendees on the first day alone. The multi-national group of attendees is representative of the diverse group of exhibitors, with exhibitors coming from Australia, Thailand, Germany and many other countries. Some manufacturers from the United States, such as Little Giants and Hy-Ko, even made the journey to Shanghai. This diversity is due to the collaboration of the different organizers, bringing together attendees and exhibitors from a wide range of countries.

Educational content, such as overseas trade seminars, provided great information on international expansion. The Presidents Council, an organization that provides a forum for buyers and sellers to build relationships and exchange information, sponsored a seminar, “Initiating Sales in North America,” which shared ways foreign manufacturers can expand into North America. Steve Powell, executive vice president at The Presidents Council, provided insight into the North American economy and market entry strategies for foreign manufacturers looking to penetrate the market.

Another seminar provided an alternative outlook for exhibitors looking to expand into the ASEAN market, which includes Indonesia, Malaysia, Philippines, Singapore and Thailand.

CIHS 2015 is the world’s largest hardware show after the International Hardware Fair in Cologne, Germany. The event is open to trade vendors from around the world.

As NRHA’s market research analyst, Sara conducts organic research and stays abreast of industry trends to help hardware retailers better run their business. Sara also contributes to editorial content in Hardware Retailing magazine. Sara received her B.S. in Marketing and Spanish from Butler University and, after graduation, began her career with NRHA. Sara enjoys traveling, being outdoors and exploring the city of Indianapolis.
Previous Children’s Book
Next Internet Use Is Always Growing; Capitalize on It