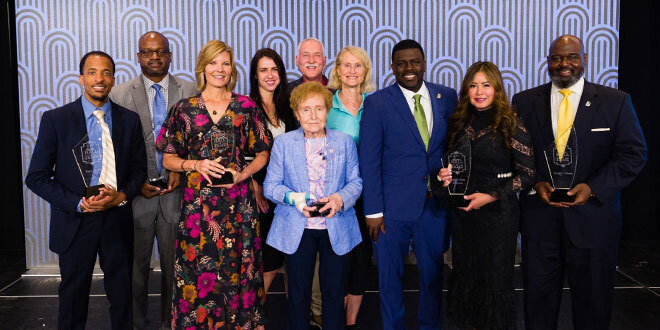 Do it Best president emeritus Don Wolf was posthumously inducted into the inaugural class of the Big Brothers Big Sisters of America (BBBSA) Alumni Hall of Fame during the organization’s annual conference. Don served as a Big and was a co-founder of the Northeast Indiana chapter of BBBSA and president of the BBBSA national board. Don’s wife Ginny accepted the award for the family at the induction ceremony held in Indianapolis. Don led Do it Best, which was then called Hardware Wholesalers, Inc., from 1967 to 1992.

BBBSA is the largest and most experienced youth mentoring organization in the United States, working to create and support one-to-one mentoring relationships that ignite the power and promise of youth.

The BBBSA Alumni Hall of Fame honors former Bigs and Littles who have championed the power of mentorship throughout the organization’s 116-year history. BBBSA recognizes these leaders whose dedication and achievements have significantly furthered its mission of inspiring young people’s passions and empowering them to achieve success in life and career.

“We are honored to celebrate these former Bigs and Littles as the first class of inductees into our Alumni Hall of Fame and recognize their personal journeys as they look back on their mentorship experiences and reflect on how it made an impact on where they are today,” says Artis Stevens, president and CEO of Big Brothers Big Sisters of America. “Among the estimated 20 million alumni Bigs and Littles, these individuals know firsthand the life-long impact that mentorship can have on one’s life and they are true champions of our vision to empower every child with a plan for their future, and a mentor whose impact can last a lifetime.”

Lindsey joined the NHPA staff in 2021 as an associate editor for Hardware Retailing magazine. A native of Ohio, Lindsey earned a B.S. in journalism and minors in business and sociology from Ohio University. She loves spending time with her husband, two kids, two cats and one dog, as well as doing DIY projects around the house, going to concerts, boating and cheering on the Cleveland Indians.
Previous Attendance for spoga+gafa 2022 Hits Pre-Pandemic Levels
Next Rebranding, e-Commerce and Category Solutions Focal Points of United Hardware’s Fall & Winter Buying Market