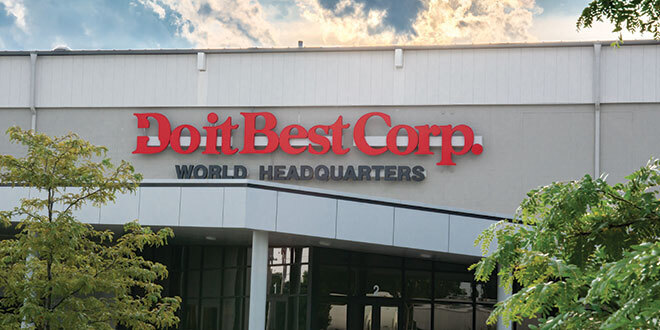 Do it Best Reports Record Profits and Rebates

Do it Best Corp. has announced record net profitability and record rebates for retailers during its most recent fiscal year, which ended in June.

The co-op’s total sales for the year were $3.6 billion and net profit was up 12.6 percent above the year prior. Retailer rebates reached $128.4 million.

Because Do it Best’s fiscal year-end falls in June, the company’s most recent financial results include several months impacted by the COVID-19 pandemic.

“In a year that threw unprecedented challenges at Do it Best and its member-owners, we worked together to satisfy the needs of the communities they serve,” says president and CEO Dan Starr. “In doing so, we posted record profits for the co-op. Those profits are then distributed to our members to use to reinvest in their businesses.”

Warehouse sales were key as the company worked to secure and ship products to retailers for their customers, according to Do it Best. Spurred by sustained demand for paint and paint supplies, lawn and garden, housewares, outdoor living, hardware, and plumbing, sales through the warehouse were up 11 percent.

Direct sales closed at 4 percent and lumber, despite volatile market conditions and price deflation, remained consistent with the prior year.

“On behalf of the board of directors, I’m grateful to our members for their loyalty to the co-op and to the Do it Best team for working tirelessly to position the co-op and its members for continued success,” says board chairman Brad McDaniel, owner of McDaniel’s Do it Center in Snohomish, Washington.

With annual sales nearing $4 billion, Do it Best Corp. serves thousands of independently owned home improvement stores across the U.S. and in more than 50 other countries.

Dan Starr, president and CEO of Do it Best, is the latest guest on the “Taking Care of Business” podcast. Stream the episode now to get his insights on the company’s recent announcement about working with Nation’s Best  and the concept of “disruption” in the home improvement industry.

Tags Brad McDaniel dan starr do it best Do It Best Corp. financials McDaniel's Do it Center slider

Kate is profiles editor for Hardware Retailing magazine. She reports on news and industry events and writes about retailers' unique contributions to the independent home improvement sector. She graduated from Cedarville University in her home state of Ohio, where she earned a bachelor's degree in English and minored in creative writing. She loves being an aunt, teaching writing to kids, running, reading, farm living and, as Walt Whitman says, traveling the open road, “healthy, free, the world before me.”
Previous Initial Unemployment Claims Fall Below 1M
Next What Is Hempcrete?