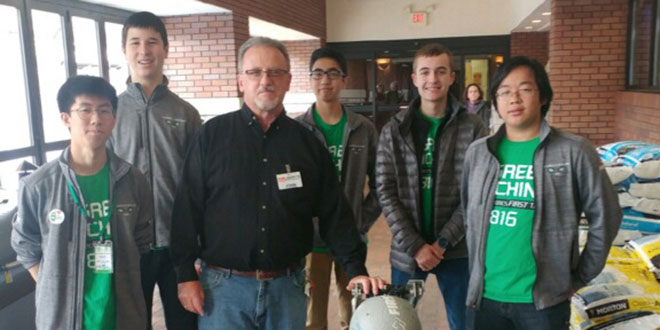 Visitors to Jerry’s Hardware in Edina, Minnesota, in November might have thought they traveled to the future where robot assistants can aid their shopping. In reality, it was just the work of skilled high school students and an area robot team that brought the future to them.

Customers at the hardware store got the chance to see the robotic creation of Edina High School’s robotics team. The machine, which is conceptualized and built by the team and then entered into state and nationwide competitions, was designed to throw a basketball through a hoop, and it did so on command for any visitor who wanted to see it in action, says manager John Connolly.

“The robotics team has been bringing their robots in every year since 2010. It really is impressive to see what each new year brings and what the kids on the team can accomplish at such a young age,” Connolly says.

The team has an open account with Jerry’s Hardware, and the team often uses the store to supply items like small nuts and bolts as well as tools, Connolly says. The store makes a yearly donation to the team and offers a discount on purchases.

“It’s really fun to see how far the team has progressed over the years. It’s gotten to the point where the high school team is so advanced that they mentor a junior high school team as well as create their own robot,” Connolly says. “The team has a lot of community support, and there’s always a lot of interest in mentoring these students.”

Chad is an assistant editor for Hardware Retailing magazine. A Purdue University graduate, Chad has covered sports and news at the high school, college and Olympic levels as a sports writer, editor and designer for multiple newspapers. Prior to joining the NRHA, he was the sports editor for the Herald Journal in Monticello, Indiana, and a designer and copy editor for the AIM Media Indiana group in Columbus, Indiana. When not cultivating his beard, he enjoys backpacking, cooking, traveling and watching too much sports and Netflix.
Previous Brothers Grow a Business by Saving Struggling Stores
Next Ace Hardware Is Focused on Retailer-Centric Change and Growth