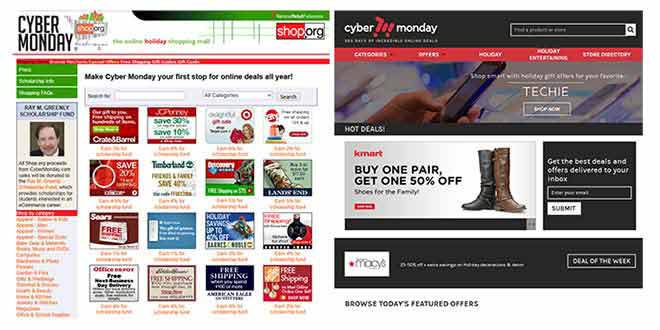 For last-minute holiday gift buying and, really, all-year shopping, it’s no secret: consumers have increasingly turned to their computers and handheld devices as gateways to a global world of retailing.

Following the brick-and-mortar stores, online retailers haven’t skipped out on the shopping holidays, such as Black Friday. And those events just keep getting bigger and more numerous, according to the National Retail Federation.

For example, Amazon started Prime Day for the first time in mid-July this year. The shopping event’s sales were only available to Amazon Prime members, a paid membership that provides free two-day shipping on many products and a video streaming service. Amazon’s sales on Prime Day slightly exceeded the online retailer’s Black Friday sales in 2014, the National Retail Federation reports.

Another online retailer, Alibaba, started Singles’ Day in 2009 as a celebration of China’s bachelors. In 2014, Alibaba reached $9 billion in sales on its shopping holiday, and this year, the company’s sales surged to $5 billion within the first two hours, the National Retail Federation says.

By far, the most lucrative day for online shopping is Cyber Monday, taking place during the Monday after Thanksgiving and Black Friday, according to the National Retail Federation. The shopping holiday is so profitable that Amazon has made it a seven-day Cyber Week.

Online retailing is only getting bigger, and social media platforms are opening new avenues for sales. For instance, Pinterest, an online board for posting images, became an avenue for retail sales this year. Manufacturers can make their product photos, which Pinterest users pin to their sites, ways to sell items. The site is popular for finding DIY project ideas, recipes and far more. More than 85 percent of Pinterest users who responded to a survey from Shopify use the site as a way to narrow down purchase decisions.

Consider how you, too, can use powerful tools such as social media and online shopping holidays to increase your business’s exposure, customer engagement and online sales.

Kevin’s strong passion for User Experience design and proficiency with various Web technologies landed him the role of “The Web Guy” at the NRHA. He graduated from IUPUI in May 2014 with a Bachelor’s Degree in Media Arts and Science and a Certificate in Computer Science. He has a pet ball python named Daenerys, he loves creating digital 3D art, and he perpetually craves sushi. He is also the President of the Indianapolis Guild of Extra Life, a non-profit organization that aims to help raise money for Children’s Miracle Network Hospitals through various video game-related events, such as marathons and tournaments.
Previous Graeme’s Take on Training: Wearing Many Hats
Next Graeme’s Take on Training: Learning More—and Getting a Workout!