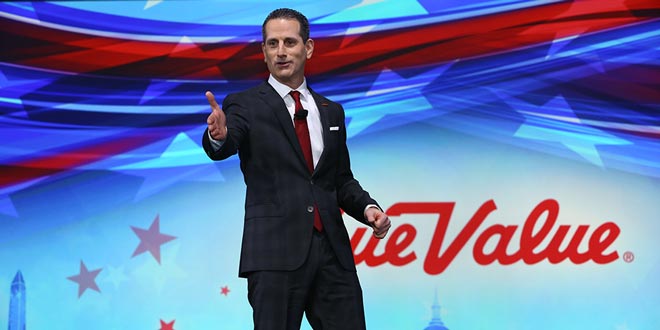 The True Value Co. today announced a plan that they say will accelerate the company’s long-term business strategy and secure the future of the independent retailers it serves.

The company has agreed to sell 70 percent ownership in the organization to private investment firm ACON Investments in a deal that would effectively transition the company away from its current co-op model.

The move, which is subject to member approval, would return approximately $229 million to True Value’s current members who, upon close of the agreement, would receive 70 percent of their invested capital, 100 percent value of their promissory notes and their 2017 patronage dividends. True Value’s board has unanimously approved and recommended the transaction.

If the deal is approved, the remaining 30 percent equity in the co-op held by members would be transitioned into stock holdings in the newly created True Value Co., allowing members to share in the value the company plans to create in the partnership, company sources say. The majority shareholder in the new True Value Co. would then be ACON, which currently owns companies with more than $5 billion in total revenue.

According to True Value’s president and CEO John Hartmann, ACON’s strategic investment in True Value will provide the co-op’s current member owners with access to money that they can use to grow their businesses while still providing them all the products, programs and services they have come to expect from True Value.

“I am very excited that this deal would release nearly a quarter-billion in money back to our members that is untouchable by them today without changing any of the fundamental relationships they have with the company,” Hartmann says. “What you expect from us today is what we will deliver to you tomorrow, but you can have your money back to do what’s right for your business.”

Hartmann says that this deal represents a watershed moment for the company and provides its current members with more flexibility to improve their businesses.

“I have very strong respect for the history of the co-op model, whether it is the True Value flag or any other co-op,” he says. “I understand why the co-op model existed, but in 2018, the concept of locking an independent retailer’s equity into a company in such a way that they can’t touch it … or make the most logical use of that money to invest in their own business … is an outdated model.”

Hartmann emphasizes that retailers on True Value’s board of directors have played an integral role in guiding the company through this process and that the board is “unanimously recommending” the balance of the co-op’s retail members approve the deal.

True Value is holding a conference call to inform all of its current members about the specifics of the proposed transaction and will be asking members to vote on the concept by April 12. According to Hartmann, after the vote is validated, the deal could be completed by April 18.

Upon completion, True Value’s current members will have no further investment requirements, and new customers would have no investment requirements to do business with the distributor. Hartmann also pledged that the company would continue to offer access to the True Value brand, giving retailers a unique opportunity to benefit from a national brand without any additional ongoing investment beyond fees to participate in regional and local advertising packages.

“True Value would be the only nationally branded wholesaler with no stock and equity requirements,” Hartmann says. “So we would be a very attractive option for people who see the value in a national brand and don’t want to pay a co-op fee.”

As far as other services currently provided to member retailers such as regional advertising, Destination True Value store sets, merchandising and training services, Hartmann says these would all still be available to retailers on a pay-as-you go basis. “At True Value, the only program fees you will have to pay are for the programs that you want to participate in,” he adds.

True Value also outlined a new volume and growth rebate program to keep the total cost of doing business with True Value substantially the same for most retailers, Hartmann says.

“The great thing about this program is that stores of all sizes can participate,” Hartmann says. “If you are a smaller store that doesn’t qualify for the volume rebate, you can still earn money back by hitting the growth goals.”

Aside from some of these new programs and the change in corporate structure brought about by the deal, Hartmann says retailers doing business with True Value should not expect to see any other major changes within the company.

“The beauty of this proposal is that retailers will continue to enjoy the core services they are accustomed to,” he says. “The same trucks will show up on the same schedules, you will have the same employees leading the company, the same great products and retail services you are used to receiving from us will continue.”

Hartmann adds that there are no planned changes in corporate management and that one of the elements about True Value that ACON found appealing was the strategic plan the co-op currently has in place and the passion of its independent retail members.

“ACON takes a long-term approach and is investing in True Value with a view to support the company’s ongoing growth and success,” Hartmann says. “They are supportive of True Value’s strategy and management team and have demonstrated that support in the strongest way possible by investing a very significant amount of their own capital to acquire a 70 percent stake in the business.”

In his position as publisher of Hardware Retailing magazine, Dan has the opportunity to visit with independent retailers of all types and sizes and use these visits to shape the editorial direction of the magazine to meet the needs of the independent hardware retail market. Dan also oversees NRHA’s other publishing projects, which include a range of special interest publications, contract publishing titles, online content and more. Dan formerly worked as an editor and reporter for Hardware Retailing and has been involved in business journalism and news reporting for the past two decades
Previous Hit the Road With Renee: Independents Stand Together in Iowa
Next Flavored Nuts