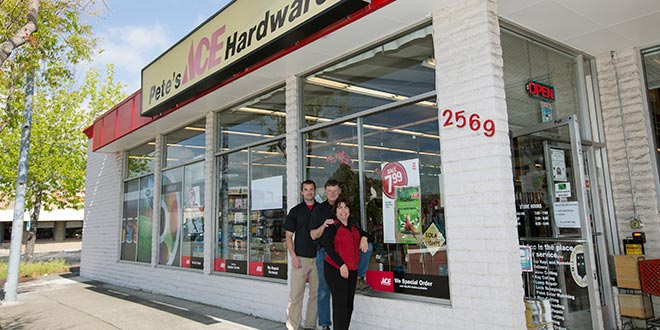 When Pete’s Hardware first opened in 1926, the family business’ most frequent shoppers were chicken, rabbit and dairy farmers, as well as fruit growers.

Today, the customer base has changed quite a bit, but 90 years later, the family business continues to abide by its ideals of providing friendly and knowledgeable service, says Linda Roark, third-generation owner of Pete’s Ace Hardware.

From One Generation to the Next

Founder Peter Selmeczki was a Hungarian immigrant who ended up in Castro Valley, California, and followed his entrepreneurial endeavors as an auto painter, Roark says of her grandfather. He and his wife Mary opened an auto paint shop, but in the front of the store, they added an assortment of hardware goods.

“My grandfather realized he couldn’t be painting a car and waiting on customers at the same time,” Roark says. “The hardware business was more profitable than the auto paint business at that time, so he concentrated on the hardware store and established Pete’s Hardware in 1926.”

As is the case in most family businesses, Roark’s father Ernie grew up in the business along with his brother Frank.

“When you are the child of a business owner, you’re always involved in the business,” Roark says. “My father prided himself when he was young and other kids had to go home and clean chicken coops or help on the farm. He always felt lucky he got to go and sweep or clean at the hardware store.”

After returning from fighting in World War II, the two brothers took charge of the business so their parents could enjoy being semiretired.

Roark also grew up in the family business, but it wasn’t until her parents were older that they realized she should be the one to continue at Pete’s Hardware.

“I was growing up during a time when a hardware store was a man’s job, so my father didn’t expect me to take over the business,” she says. “I had gotten married and was living in southern California when my parents came to visit. At that point, my father realized he probably ought to have me run the business.”

The Key to Longevity

In order to establish and maintain a business for nearly a century, Roark says it’s important to adapt and deliver the customers what they want and need.

“Our family business has always worked to meet the needs of the community,” she says. “When my grandparents started, Castro Valley was very agricultural so they stocked agricultural items. Then, during the prohibition era, they sold gallon jugs that customers used for bootlegging. As my father ran the business, the community became more residential and geared toward contractors. Today, people come to help maintain and improve their homes and businesses.”

She and her husband Jeff hope their son, Jason, will be able to continue leading the store’s evolution and meeting the needs of future customers.

“Pete’s Hardware is now into its fourth generation,” Roark says. “Our son Jason is going to be taking over the business. He’s been working very hard and doing a great job of learning and managing the store.”

Later this month, Pete’s Ace Hardware we’ll be celebrating its 90th anniversary with its community and loyal customers. Roark says they plan on having live demonstrations, special savings, refreshments and raffle prizes. She also plans to set up a pop-up museum that will feature the history of Castro Valley as well as the story of Pete’s Hardware.

The business’ success under Roark’s leadership has been helped by well-informed advisors, she says.

“I think one of the most important things I was told was that you can’t know everything, so you surround yourself with people who are very knowledgeable in different areas and you always listen,” Roark says. “I think that’s been a key to the success and longevity of our business.”

Renee Changnon is the retail outreach coordinator for NRHA. She meets with retailers in their stores and at industry events and introduces them to the services NRHA provides. Renee previously worked as a member of the NRHA communications team. She earned a degree in visual journalism from Illinois State University, where she served as the features editor for the school newspaper. After college, she implemented marketing and promotions initiatives at Jimmy John’s franchise locations across the country. She enjoys exploring books with her book club, Netflix marathons and hosting goat yoga at her apartment complex. Renee Changnon 317-275-9442 rchangnon@nrha.org
Previous Sears to Sell Off Major Brands?
Next What Millennials’ Home Decorating Means to You