Home » Promotions » Food for Thought: Taking Charity to the Next Level 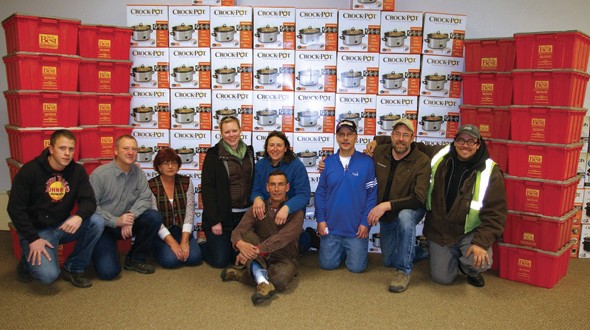 Food for Thought: Taking Charity to the Next Level

The employees at Moscow and Pullman Do it Best Building Supplies understand the adage about giving a man a fish, and they put the meaning behind it to work with their annual food drive, which continues to get bigger each year.

The drive covers 15 communities in the Palouse area of Idaho, and in addition to collecting canned goods donations from residents, local farmers donate food they’ve grown, including peas, lentils and beans. The food that’s collected goes to food pantries in these communities.

This year, Rick Minard, general manager of Moscow and Pullman Do it Best Building Supplies, took it a step further, contacting Do it Best Corp. to see if it could help with any crockpot donations. “We had 100 crockpots donated, and we took those to the food banks, too,” Minard says. “Now, not only are we giving food to folks who are struggling, but we’re also giving them a means to cook good, nutritious meals.”

High school and college students and volunteers from church groups and throughout the communities gathered in each community to go door-to-door, collecting donations for the food drive, which is usually held on the first Saturday of December each year.

The food drive is followed by a silent and live auction to raise much-needed cash for the food banks and other nonprofit charities that focus on children and abating food insecurities.

“This year, we raised $30,000,” Minard says. “They can use the money to buy meat, milk and other products that don’t last as long on the shelf.”

The food drive started in Moscow about 15 years ago. “There were a few employees who wanted to help out in Moscow, and the first food drive had about 10 volunteers,” Minard says. “It’s expanded more and more each year.

“This year, we covered 15 communities in a 30-mile radius, and we had about 700 people helping out,” he says. “It’s the biggest fundraiser in town. The local food banks rely on it.”

In fact, in 2006, Minard started a nonprofit organization, Palouse Cares, to help with the fast growth of the food drive.

“All it takes is one or two people who love their communities and want to find a way to help,” he says. “The day of the food drive is humbling and very fulfilling. We always look forward to helping out and are proud to be involved.

Liz is the special projects editor for Hardware Retailing magazine. She reports on news and trends, visits retailers, and attends industry events. She graduated from Xavier University, where she earned a degree in English and Spanish and was a member of the swim team. Liz is a Louisville, Kentucky, native who lives in Indianapolis with her husband and two children. She enjoys swimming, reading, doing home improvement projects around her house and cheering on her two favorite basketball teams, the Kentucky Wildcats and the Xavier Musketeers.
Previous Turning Hardware into a Work of Art
Next A Busload of Reasons to Promote Local Teams