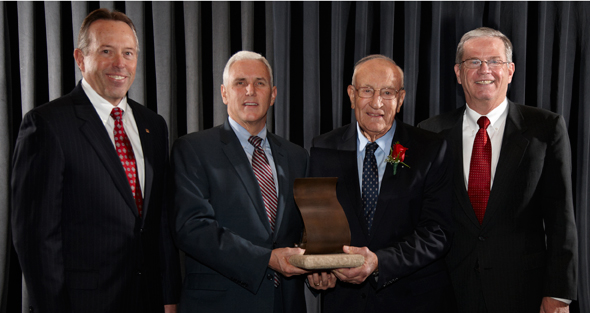 Former Do it Best President and CEO Honored

An old friend and supporter of the hardware industry was recognized in Fort Wayne on Dec. 19, when Don Wolf, the retired president and CEO of Do it Best Corp., was awarded the Sachem Award.

More than 300 people, including Wolf’s family and friends, as well as community leaders, were in attendance when Indiana Gov. Mike Pence presented Wolf with the award, which is Indiana’s highest honor.

The Sachem Award is given to only one resident of the state each year and honors someone who has been a leader in the community.

Wolf served as president and CEO of Do it Best Corp. (formerly HWI) for 25 years. He was a supporter of numerous charities and non-profit organizations, including founding Big Brothers Big Sisters and Study Connection in Fort Wayne.

“Don exemplifies everything the Sachem Award stands for and, just as importantly, what it means to be a Hoosier,” Pence says. “It is more than his notable achievements in business that make Don Wolf worthy of Indiana’s highest honor—it is his character, his selflessness, his generous nature and his unwavering commitment to serving his neighbor.”

“It is a humbling experience to be recognized by the governor with this award and to be joined by so many in doing so today,” Wolf says. “I worked to set an example for others in both my professional and personal life, and it is a wonderful feeling to see that those efforts have a lasting impact on our community and our state.”

Amanda Bell was an assistant editor of Hardware Retailing and NRHA. Amanda regularly visited with home improvement retailers across the country and attended industry events and seminars. She earned a degree in magazine journalism from Ball State University and has received honors for her work for Hardware Retailing from the Association of Marketing and Communication Professionals.
Previous True Value Adds to Board of Directors
Next Target Confirms Massive Credit Card Data Breach