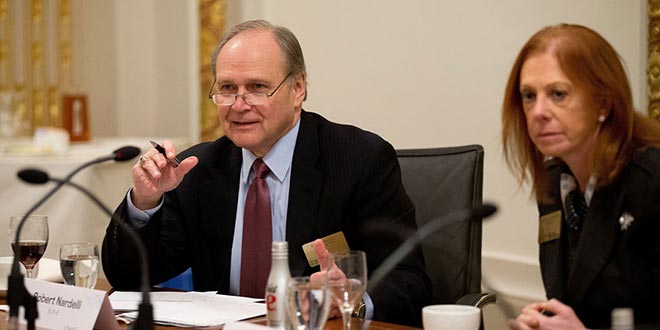 In a recent episode of “Fast Money” on CNBC, former Home Depot CEO Bob Nardelli spoke about how Home Depot has found success in both traditional and online retailing.

“They are using the bricks and the clicks together,” Nardelli says in the segment. “You can order your mulch on Wednesday and go pick it up on Saturday, and now you’re not wasting time getting distracted in the aisles.”

Nardelli spoke about how Home Depot supports its customers online and in the store, and continues making the shopping experience better.

“I think complacency is the worst thing that happens today, certainly in retail,” he says.

“They haven’t built many stores since 2007, so they’re able to redeploy that capital into keeping it fresh, aspirational, great point of sales, planogramming, etc.,” he says.

“Part of it is, when you go into the store, you do like the experience,” Nardelli says.

In addition to creating an experience, Nardelli explains how Home Depot’s training strategy helps increase transaction sizes, even if it’s just by $1 per customer.

“If we could increase $1 a cart, it would be $1.8 billion. So we trained the associates to sell the project,” he says. Nardelli says that selling projects instead of just products helps customers avoid a second trip to the store—or worse, a trip to a competitor—and increases sales across the board.

Nardelli led the big-box home improvement retailer from 2000 until he resigned in 2007.

Melanie is the managing editor for Hardware Retailing magazine. She worked in central Pennsylvania for several years after college and returned to the Hoosier State in late 2016 to join the NRHA team. In her spare time, she enjoys testing new recipes and watching online makeup tutorials. She and her husband are raising their son and two fur children in Indianapolis.
Previous Drive More Sales With Stack Displays
Next Amazon to Acquire Whole Foods, Expand Brick-and-Mortar Footprint