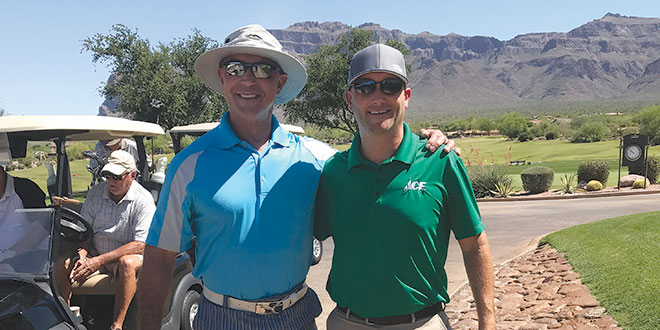 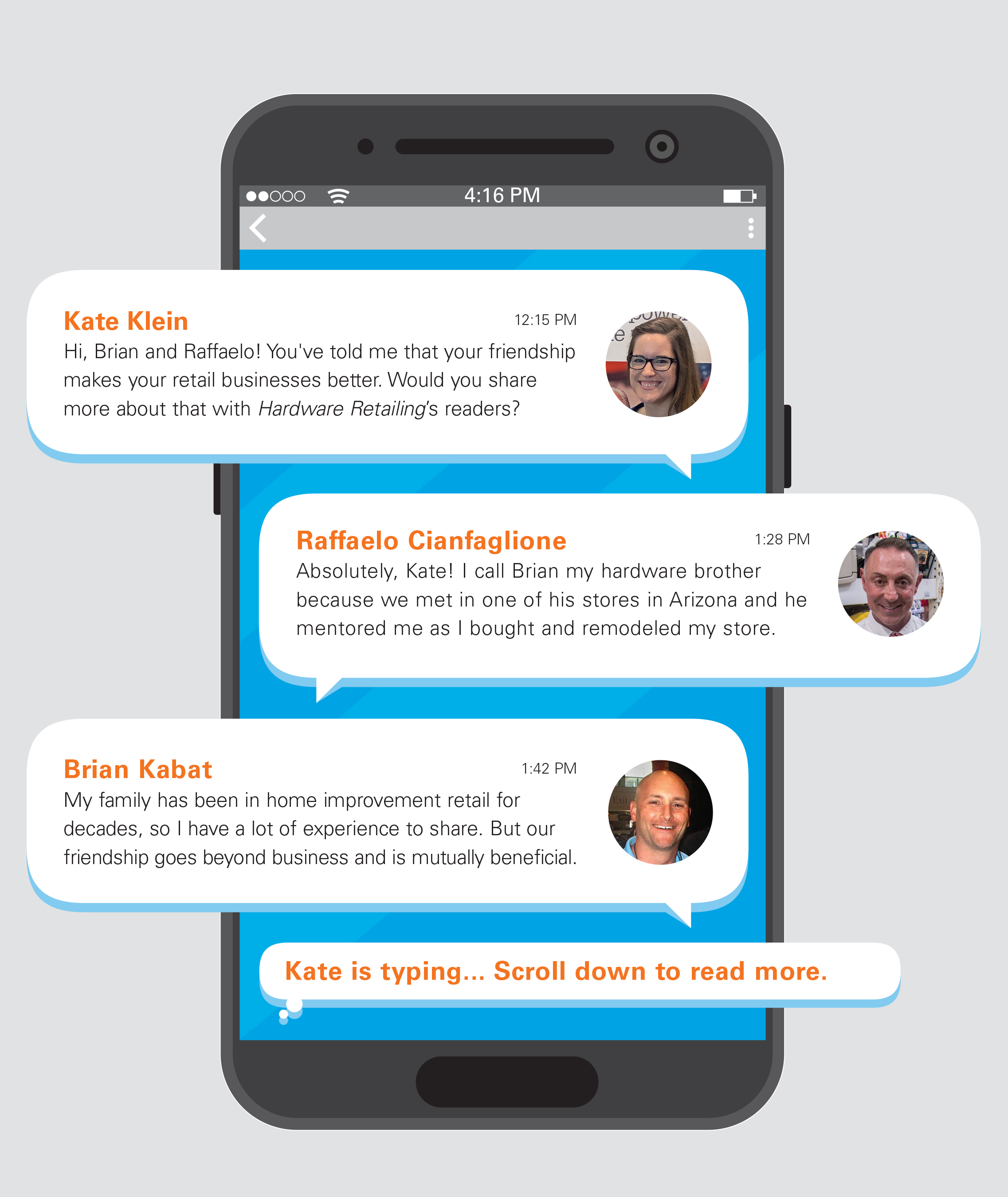 On a recent FaceTime call, Raffaelo Cianfaglione gave his friend Brian Kabat glimpses of his store in Norridge, Illinois.

“He’s my hardware brother,” Cianfaglione says with a grin.

Cianfaglione and Kabat are both independent home improvement retailers, but the laugh-filled conversation was one someone could have had with a sibling.

The two men chatted about Kabat’s family vacation and Cianfaglione showed off signage behind the Norridge Ace Hardware service counter. They didn’t have to say much to catch up—they talk on the phone every other week or so and text each other in between.

In 2014, Cianfaglione walked into Kabat’s office at Frontier Ace and began quizzing him about how to run a hardware store. Kabat’s first thought was that he was facing a potential competitor.

However, by the end of that initial conversation, Kabat was committed to helping Cianfaglione become a retailer.

Cianfaglione already operated a construction business in Illinois, so entrepreneurship wasn’t new to him.

He was also sincere, enthusiastic and eager to learn about home improvement retailing, Kabat says. His personality and experience helped, too.

“He’s such a savvy business person. I don’t know many people with the energy he has,” Kabat says. “His smile is electric.”

Kabat promised to share the hard lessons he’s learned and the successes he’s seen in many years of retailing and also show Cianfaglione all of his stores’ financial records.

That’s when the hardware brotherhood began. “Our friendship is beyond business,” Cianfaglione says. “I lean on him. He leans on me. It’s a good thing.”

Learning From His Experience

Making friends with Kabat opened up resources for Cianfaglione he wouldn’t otherwise have had. Kabat shared lessons he’s learned, as well as his company policies, employee handbook, knowledge of his POS system and financial data. Check out Cianfaglione’s store at TheRedT.com/norridge-ace.

Cianfaglione had shopped at the Kabats’ Apache Junction location for several years before he decided that buying his own home improvement store would be a solid investment.

He thought owning a store would be helpful for supplying his construction business in Illinois and good for the DIY work on his house in Arizona.

Kabat listened to Cianfaglione’s story and they began an ongoing conversation about store locations and what area made sense for Cianfaglione to buy a store.

They tossed around several ideas, including that of Kabat selling Cianfaglione one of his stores in Arizona.

But when Kabat visited with Cianfaglione and his wife Jackie in Illinois to finalize details about selling them a store, Kabat asked Jackie what she thought of Arizona. She said she liked it, but wasn’t enthused about the state, so Kabat stopped the conversation and the deal.

“We were making a mistake,” Kabat says. “I told them, ‘You need to find a store locally, and I will help you.’”

Kabat was convinced that a location where everyone in the Cianfaglione family could be involved and that wouldn’t separate the family frequently was the best idea.

Based on Kabat’s redirection, Cianfaglione began looking for stores in 2016 in the Chicago area.

During the search, he checked out the store where his father used to take him in Norridge, his childhood hometown.

Cianfaglione’s visit to Norridge Ace Hardware was a revelation.

Cianfaglione was one of multiple retailers wanting to buy Norridge Ace Hardware, but his story and timing were the right fit.

The owner, who was in his 80s and ready to retire, took Cianfaglione seriously because of his personal history with the business.

“He’s Korean and I started talking to him in Italian,” Cianfaglione says. “He asked me, ‘How do you know I speak Italian?’ and I told him, ‘I used to come here as a kid with my father.’”

Both Kabat and Cianfaglione rely on each other to talk through business struggles and stressors. Kabat calmed Cianfaglione down when he second-guessed buying Norridge Ace and gave advice when he was training the staff to embrace changes that came with new ownership.

Kabat was ready to help Cianfaglione with his due diligence prior to buying the store. Norridge Ace had a good location, a solid existing business and opportunities for growth. Cianfaglione and the former owner struck a deal.

In May 2016, Cianfaglione took ownership and called Kabat. He had big emotions and full-blown buyer’s remorse, which are normal, Kabat says.

Kabat was right. Currently, Cianfaglione, Jackie, their daughter and niece all work at the store.

Cianfaglione juggles oversight of both of his businesses, but Jackie is at the store daily, working at the cash register, rearranging displays and curating the lawn, garden and housewares products Norridge Ace sells.

They have remodeled the 24,000-square-foot store, expanded the salesfloor, updated the product mix and begun the renovations necessary to add a 3,700-square-foot sporting goods department. Cianfaglione also has plans to upgrade the outdoor garden center eventually.

Norridge Ace Hardware was strong when Cianfaglione bought it, but he’s grown both sales and foot traffic since taking ownership.

Kabat has helped Cianfaglione develop store processes and made himself available for late night and early morning phone calls when Cianfaglione has pressing questions. They also attend distributor buying shows together.

But what began as a mentorship is now mutual, Kabat says. Their friendship involves fun, like afternoons golfing.

Cianfaglione is still one of Kabat’s loyal customers. Whenever he heads to his home in Arizona, he expects to see Kabat many times, between plans to meet up socially and his repeat supply runs to the Apache Junction store.

Business is still a major part of their friendship; they regularly problem-solve together and share ideas.

And a tagline that Kabat’s employees use for thanking customers, “There is no us without you,” was Cianfaglione’s brainchild.

Both retailers are proud of Norridge Ace. Cianfaglione enjoys serving his many customers, including the local people who remember him from childhood, he says.

Kabat takes particular pride in having helped guide Cianfaglione to the location that is close to home and works well for his family.

Plus, the ways Cianfaglione serves the city and has adapted his product mix in response to customers are assets, Kabat says.

“He’s been such a good thing for the city of Norridge,” Kabat says. “He knows a lot of people there and he’s been such a significant addition to the community.”

Cianfaglione’s store is doing well—and Kabat, who has been a friend and adviser since the beginning, understands the effort Cianfaglione has poured into it. In Kabat, Cianfaglione has a friend who can celebrate and be proud of the store in a heartfelt, invested way.

Kate is profiles editor for Hardware Retailing magazine. She reports on news and industry events and writes about retailers' unique contributions to the independent home improvement sector. She graduated from Cedarville University in her home state of Ohio, where she earned a bachelor's degree in English and minored in creative writing. She loves being an aunt, teaching writing to kids, running, reading, farm living and, as Walt Whitman says, traveling the open road, “healthy, free, the world before me.”
Previous Espresso Machine
Next Stock These Plants to Serve Customers Who Want Low-Maintenance Options