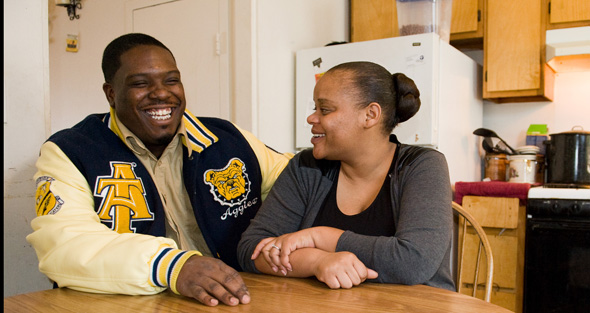 Family life had become a challenge for Jacorey Jenkins and Barbara Poynter-Jenkins. While Jacorey lived in Chicago during the week to commute to his job in northern Indiana, Barbara and their three children, Coreyone Jenkins, 14, Leonta Jenkins, 8, and Derionna Poynter, 4, lived north of the city, nearly 45 miles away. After three years, the strain on their relationship and their family had taken its toll.

“Jacorey told me he wanted to come home and rebuild his family,” Barbara remembers.

Not-so-sweet Home
Their home in North Chicago, however, wasn’t the best place to do so. The cramped two-bedroom apartment in a subsidized housing development was in a rough area that became too rough when a shooting outside their building drove Barbara and the children to a hotel.

“Coreyone was always on edge because he felt responsible for watching Leonta and Derionna and protecting them from the drugs and violence all around us,” Barbara says.

Yvette Ewing, executive director of Fuller Center for Housing Hero Project Lake County, and husband Ronnel, knew Barbara and Jacorey from their church and knew the program would be an answer to the family’s housing problems. Through prayer, mentoring and education, the Ewings guided Barbara and Jacorey in strengthening their family relationships and helped to prepare them for home ownership.

Once they located a home for the family in Waukegan, the real work began.

“It was a long process because we had to completely gut the house,” Barbara says. “We received approval for our project last September and broke ground in October. We moved in June 1.”

The Fuller Center asks that program recipients provide 100 hours of sweat equity to prepare their homes for occupancy. Jacorey worked well beyond those 100 hours, which gave him the opportunity to learn from builders and contractors—skills that helped him secure full-time employment.

Barbara, too, learned from the process. She was hired at a call center for a construction company, promoted to supervisor then project coordinator after writing a training manual.

Answered Prayers
Although their new neighborhood is less than a mile from the old, Barbara describes the two as “night and day.” The family has reached out to their new neighbors and established bonds to strengthen the community. Their neighbors have welcomed them and gladly watch out not just for Coreyone, Leonta and Derionna, but the home itself.

“Our home has four bedrooms, two baths and a basement,” Barbara says. “Now all the kids have their own rooms and we have a huge backyard where they can play and I don’t have to worry about safety. I’ve seen the most change in my oldest son. Before he was always watching his brother and sister and now can just go out and skateboard—he hopes to compete in the XGames [extreme sports competition] someday. None of them feel confined anymore, they can go out and release that energy and they’re so much happier.”

Once they heard Barbara and Jacorey’s story, people throughout the community stepped up. The family received donated clothing for the children as well as furniture so they didn’t need to worry about furnishing their new home.

“We are truly blessed,” Barbara says. “It’s amazing what can happen when others see two people who want to make a change.”

Renee Changnon is the retail outreach coordinator for NRHA. She meets with retailers in their stores and at industry events and introduces them to the services NRHA provides. Renee previously worked as a member of the NRHA communications team. She earned a degree in visual journalism from Illinois State University, where she served as the features editor for the school newspaper. After college, she implemented marketing and promotions initiatives at Jimmy John’s franchise locations across the country. She enjoys exploring books with her book club, Netflix marathons and hosting goat yoga at her apartment complex. Renee Changnon 317-275-9442 rchangnon@nrha.org
Previous Veterans Spending More at Home Improvement Stores
Next Ace Hardware Announces Third Quarter Results