Home » Promotions » Funds Are ‘In the Bag’ in Ontario 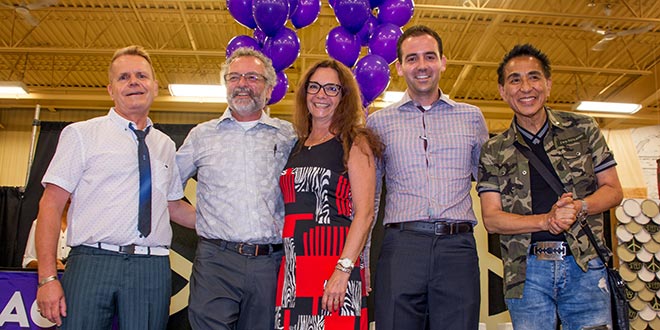 Funds Are ‘In the Bag’ in Ontario

The event, designed to raise funds for a worthy charity each year, is also one the community looks forward to for a night of fun and entertainment. In previous years, Ladies’ Night has donated funds to the Canadian Breast Cancer Foundation, says marketing manager Rick Lackovic.

For the 2017 event, Lackovic and JL’s Home Hardware decided to look more local, with funds going to the Guelph-Wellington Women in Crisis, a community-based organization that provides services to women and children suffering from abuse and violence.

“We were really excited to go more local for this year’s event, and it’s really nice that everyone involved, from the attendees to the vendors, know where the money is going and who it is helping,” Lackovic says.

The fashion focus was inspired by the honored guest at the event, Montreal-based fashion designer and Beauti-Tone Paint’s creative director Simon Chang. While Chang was eager to be involved in the event, he didn’t want it to be a fashion show. So Lackovic came up with another idea.

“It’s called Helping Handbags, and we borrowed that theme for what we called, ‘It’s in the Bag,’” Lackovic says. “We set up a catwalk in the store, and some of our staffers served as models to show off 21 designer purses that we had filled with gift cards, certificates for local restaurants, cosmetics and other items. We auctioned off the purses and raised about $7,000.”

The night also included samples from area restaurants as well as a local brewery, something that Lackovic says is a big part of the community feel for the event. He rotates the restaurant selection each year in hopes of making sure everyone has a chance to be represented.

“Ladies are very influential in design decisions. We want these attendees to feel comfortable and know we’re a trusted location for the products they need,” he says.

Chad is an assistant editor for Hardware Retailing magazine. A Purdue University graduate, Chad has covered sports and news at the high school, college and Olympic levels as a sports writer, editor and designer for multiple newspapers. Prior to joining the NRHA, he was the sports editor for the Herald Journal in Monticello, Indiana, and a designer and copy editor for the AIM Media Indiana group in Columbus, Indiana. When not cultivating his beard, he enjoys backpacking, cooking, traveling and watching too much sports and Netflix.
Previous Decorative Outdoor Hardware
Next Smart Refrigerator